Honoring Korean brethren who live a world away

Honoring Korean brethren who live a world away 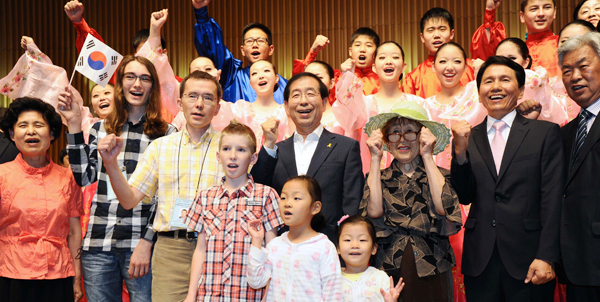 Approximately 550,000 ethnic Koreans currently reside in Russia, Uzbekistan, Kazakhstan and other Central Asian nations. Known here as goryeoin, many immigrated toward Russia as the Joseon Dynasty (1392-1910) began to wane.

This year marks 150 years since the first round of Koreans immigrated to Russia, and on Tuesday, the Seoul Metropolitan Government celebrated this anniversary by inviting a group of goryeoin back to Korea.

The event was attended by 124 ethnic Koreans, including the descendants of independence fighters.

It was the biggest batch of goryeoin to visit the country since 1999, when the Koryosaram Aid and Sharing Movement Association first established the program.

“I wanted to show my son our homeland to let him know his roots,” said Alexander Shorukov, 42, an ethnic Korean who lives in Russia.

Like many goryeoin, he is a descendant of an independence fighter. His maternal great-grandfather was Choi Jae-hyung (1858-1920), a successful businessman who helped finance the Korean Provisional Government and supported patriot Ahn Jung-geun’s assassination in 1909 of Ito Hirobumi, the first Japanese resident-general of Korea.

Choi was awarded the Independent Medal in 1962.

“There are many similarities between Russians and Koreans, such as the habit of impatience when driving,” Shorukov continued. “Korea doesn’t seem unfamiliar at all, and I am happy just stepping foot in my native land.”

His 12-year-old son added, “Truthfully, I didn’t know much about Korea. Through this visit, I will learn Korean and study much more about Korea.”

Lee Gwang-gil, head of the Koryosaram Aid and Sharing Movement Association, said that goryeoin were generally the descendants of independence fighters.

“We have a national responsibility to recognize them and treat them as our overseas compatriots,” he said. “We started this event to spread the message that goryeoin are not people who have been forgotten or deserve our pity, but Korean people of whom we are proud.

“The goryeoin are a group of people who succeeded in farming vast lands across Russia and Central Asia,” Lee added. “If we import the agricultural goods that they farm, as a country that generally imports food, we will also be able solve our food-shortage problem.”

He noted that while a special law for goryeoin was enacted last year, there continues to be restrictions on their employment and naturalization here.

“Through the supplementation or revision of the act, the goryeoin, like the Koreans overseas in the United States, should be recognized as our compatriots.”