Postmortem of a Cup to forget

Postmortem of a Cup to forget 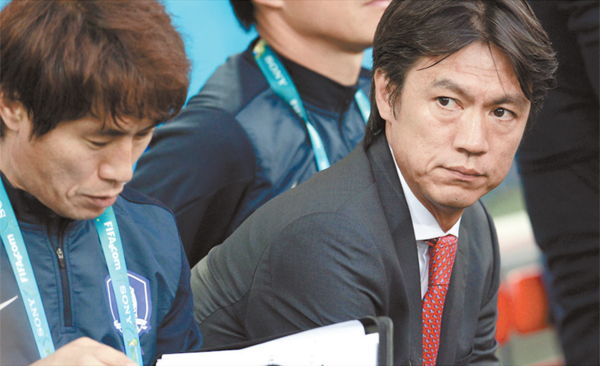 Coach Hong Myung-bo, right, watches the action during the 1-0 loss to Belgium on Thursday local time that eliminated Korea from the World Cup. [NEWSIS]

After Korea was eliminated from the 2014 Brazil World Cup with a record of one draw and two losses, Korean Coach Hong Myung-bo took responsibility for the result but said he hasn’t decided whether he will resign from the post.

The following are excerpts from the press conference with the coach and players after the 1-0 loss to Belgium on Thursday, local time.

Q. Why did Korea fail to advance to the Round of 16?

A. I think I was the biggest problem on this team. I failed to prepare well for the tournament, and I’m accountable for everything. Our players did their jobs well.

You said you are accountable for everything. Are you considering resigning?

I don’t think I can answer that question now. Let me decide on my own.

[Hong’s contract expires after the 2015 Asian Cup that gets under way in January.]

All of the Asian teams were eliminated after the first round. What do you think were the reasons?

They must have prepared their best, but it just didn’t work out. I think we need to get better for sure in the future.

The worst moment was when we allowed three goals in the first half against Algeria.

We had some impact with substitutes [Kim Shin-wook and Lee Keun-ho] in the second half, but the game was decided even before we utilized those jokers. Again, it was all my fault.

You didn’t start Park Chu-young against Belgium. Why?

I just started a player who I needed tactically for the match.

This World Cup must be the worst experience of your coaching career. Will you consider opinions and criticism from the media, fans and the Korea Football Association when making a decision about your future?

I don’t get influenced by such opinions, and I will try to make the right decision.

I don’t know what kind of future I will have, but all I can do now is accept everything I have done with the team and deal with it.

As the captain, how would you evaluate the team’s performance?

We tried our best for a good outcome in the World Cup, but we were lacking experience and there was a lot of mental pressure.

We only had one year under Coach Hong’s leadership, and I think that wasn’t enough time for us to develop into a strong team.

What were the biggest problems?

I think every single player is accountable for the result. We needed to be in better shape physically and mentally.

Everyone on the team saw Park practicing so hard every day. But because so many people focused on his play, he was under a lot of pressure.

This was your first World Cup. How was it?

I always dreamed of playing here. I want to thank all of my teammates and the coach.

You cried a lot after the Belgium match.

I felt so sorry for the fans who supported us and sorry that I couldn’t show my best on the field.

vThe coach and other teammates comforted you when you were crying. What did they say?

They said it will be all right and we will have another chance in the future. They also said I will get better every day.

You scored your first World Cup debut goal against Algeria. How do you feel about that?

It was meaningful as an individual, but the team lost. Since I’m still young, I will prepare better in the next World Cup.