May industrial output off 2.7%; exports erode

May industrial output off 2.7%; exports erode 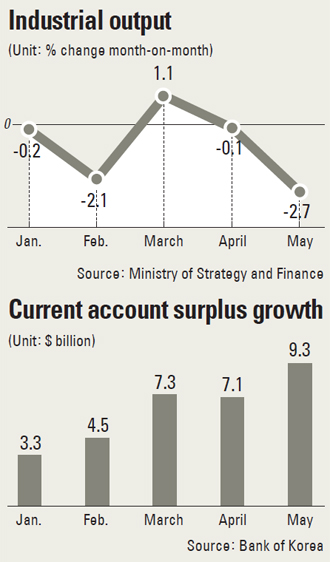 The nation’s industrial output in May saw its sharpest month-on-month drop since late 2008 and exports shrank, despite a continuing current account surplus for the 27th consecutive month.

The data from the Finance Ministry comes at a time when there are concerns over the nation’s economic growth, which many believe has been slowing, particularly with the Korean won staying strong against the U.S. greenback.

According to the ministry yesterday, industrial output last month dropped 2.7 percent from April, marking the sharpest decline since December 2008, when output tumbled 10.5 percent.

In the first five months of the year, industrial output expanded only in March, when it grew 1.1 percent month-on-month.

The Finance Ministry attributed May’s manufacturing production decrease to fewer working days with holidays at the beginning of the month, including Labor Day, which was on Thursday this year, Children’s Day on Monday and Buddha’s birthday on Tuesday.

Since weekends fell between the holidays, many companies gave employees Friday off.

As a result, the government said, production at auto plants fell 7.3 percent.

However, the ministry noted that the impact on the economy caused by the Sewol tragedy that claimed the lives of more than 300 passengers and crew members seemed to have abated.

The situation was similar for service industry output, which inched up 0.6 percent from a 1.2 percent decline in April.

Retail turned around as spending on telecommunication products, including smartphones, was up last month.

Service industry output grew due to increased outdoor and cultural activities thanks to the pleasant mild weather, which also contributed to an increase in beverage sales.

But in its report, the Finance Ministry noted the turnaround was not enough to compensate for the losses in April. In fact, it said that because overall industrial activities are weak, it will heighten its monitoring of the economy.

The concern over the disappointing output and slowing economy was compounded by weaker exports.

Also yesterday, the Bank of Korea announced that the current account balance had recorded a surplus for the 27th consecutive month, the longest stretch since the Asian financial crisis in late 1997.

Furthermore, the accumulated surplus in the first five months of this year was $31.5 billion, which is the largest ever recorded from January to May.

Imports last month amounted to $43.3 billion, 1.6 percent less than a year ago and off 6 percent from April.

Due to reduced exports, the goods account last month shrank from $10.7 billion to $9.4 billion.

Meanwhile, the service account deficit eased from $1 billion to $340 million.