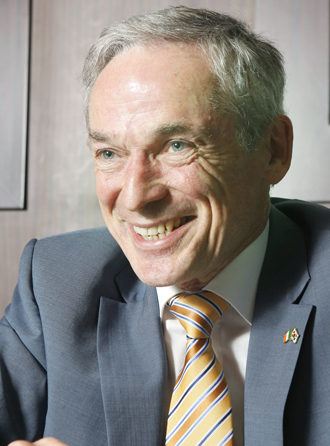 “The policy in Korea of promoting a creative economy is absolutely on the money,” said Richard Bruton, the Irish minister for jobs, enterprise and innovation, in an interview in Seoul.

“We see jobs, enterprise and innovation as being three legs of the same stool, so to speak, and you can’t have one without the other,” Minister Bruton told the Korea JoongAng Daily as he sat down for an interview on Thursday at the Hyatt Hotel in central Seoul. “From my point of view, it’s an integral part of my own title.”

This marks the first visit to Korea by Ireland’s head of the Department of Jobs, Enterprise and Innovation, although this is Bruton’s second visit to Seoul.

Bruton has been a proponent of the development of a competitive, dynamic and innovative Irish economy, comparable to the President Park Geun-hye administration’s vision of creative economy and entrepreneurship in the era after the global financial crisis. Park has pushed for innovative ideas to be combined with the sciences, technology and ICT to support start-up businesses and the creation of new industries and new markets.

Ireland successfully exited an International Monetary Fund (IMF) program last year and is on the road to an economic recovery, in which Bruton has played a key role.

“We have created an ecosystem that is very supportive of start-up companies,” said Bruton, who previously served as minister for enterprise and employment in the 1990s and vice minister of industry and commerce in the 1980s. “We have a very vibrant SME and start-up community. Every year, Enterprise Ireland would take an equity stake in about 160 start-up companies each year.”

He also pointed out that two-thirds of all jobs created in the economy in Ireland come from companies in the first five years of their existences.

Bruton was behind successful employment policies that created a thousand jobs a week in Ireland in the mid-1990s. “Government focus on job creation is very important,” he said. “Every agency of government was enlisted to the cause of promoting job creation.

“If you want to build strong sectors in areas in which we have a comparative advantage,” he said, “it’s just as important that you build a skill base.” This includes innovation, such as investments in research, opening the health systems, to test innovative ideas, and encouraging a tax environment that is conducive and is continuously evolving to support start-ups.

Traditionally, Ireland has had strong economic ties with the United States and the European Union. But Ireland is looking to expand to the Asian market and Bruton stopped in Seoul following a visit to China.

During his two-day trip to Korea, Bruton met with top Korean conglomerates in the life sciences, biomedical and ICT sectors, as well as with senior officials at the Korean Ministry of Sciences, ICT and Future Planning to discuss closer governmental cooperation in this area. He also attended business forums.

While facing fiscal challenges and a huge deficit, Bruton said, the Irish government recognized, “If you don’t start to reorganize to build a successful export-led economy, you’ll not successfully meet the other challenges on the fiscal and the banking side … We had become too reliant on sectors related to property, and you can’t build a long-term economy based on selling property to one another at ever-rising prices.”

About 20 Irish companies already have a presence in Korea, he said, but Ireland is looking to increase its presence here.

Bruton says there is especially good potential in expanding cooperation in the life sciences and ICT sectors between Ireland and Korea.

“From the point of view of Korean companies looking at entering European markets, Ireland has been a very successful gateway to Europe for many, many decades now,” he pointed out.

“Trade volume was larger in the past and the crash did impact on two-way trade between our countries,” he said, “and we have the ambition to build that up fairly rapidly.”

Bruton said, in terms of the economic potential of a unified Korean Peninsula: “From our own peace process [with Northern Ireland], we have certainly found that you have to talk to build peace, and it has been a painful process. But it’s an interesting case study in Ireland as to how our peace process can be slowly built, and there is no doubt it has yielded dividends.”

Compared to his first visit to Seoul, he said, “I see tremendous change and tremendous advances that have been made here … and the infrastructure has dramatically improved.”

He added, “The level of ambition that Korean companies show is very impressive - to see companies entering new sectors and seeking to build world leadership in key sectors, which is a feature of many of your companies. They don’t aspire to be bit players in sectors, they aspire to lead.”