Pursuits of Korea’s ‘Hawking’ are limitless

Pursuits of Korea’s ‘Hawking’ are limitless 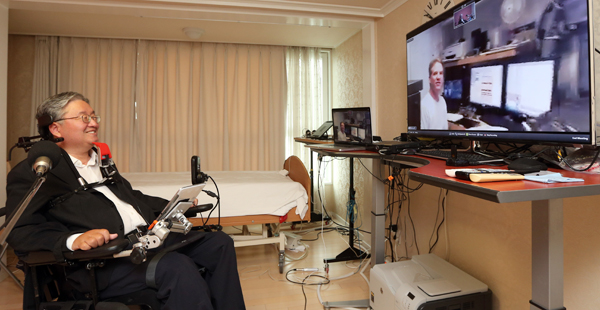 Earlier this month, Seoul National University Professor Lee Sang-mook, 52, made a visual satellite call to the research team aboard the Joides Resolution, a scientific drilling ship that sails in waters about 1,000 kilometers (621 miles) away from his living room in Seocho District, southern Seoul.

The vessel’s research lab popped into view on his large-screen television, which was connected to his laptop. On the other end of the line, world-renowned seismologist Michael Gurnis, from the California Institute of Technology, greeted the Korean geologist.

Lee situated himself in his chair about two meters (six feet) from the screen and started the conversation in English. Gurnis, who is the director of Caltech’s Seismology Laboratory, told his colleague that the team had just completed its fourth drill and confirmed that he would send the data to Lee’s email.

Using his iPad camera, he then guided the professor around the vessel’s lab, which was filled with microscopes and other equipment. He introduced several of the researchers there and explained their work process.

The 18,600-ton Joides Resolution is operated by the International Ocean Discovery Program (IODP), the world’s largest earth science research project. About 20 countries, including the United States and Japan, have invested in the venture. The daily use of the drill ship alone costs 500 million won ($495,000).

The expedition team left from Yokohama, Japan, on May 31 and headed to the Izu-Bonin-Mariana Arc in the West Pacific, where they have been drilling below the ocean’s floor.

Since the first day, Lee has been communicating with the research team. He joined the expedition when the idea was first proposed during an academic conference last year in Japan. The Philippine Sea Plate, which has experienced major volcanic activity and contributed to earthquakes in Korea and Japan, is believed to turn 90 degrees every 50 million years. So far, however, no proof to back this theory has been found.

The crux of the Korean professor’s theory is that the plate’s rotational degree can be calculated through drilling and measuring its magnetism. Gurnis acknowledged that if the actual activity of the Philippine plate could be proven, the discovery would be groundbreaking.

The problem is that the researchers participating in the expedition must spend months out at sea. This is a challenge for Lee, who has been paralyzed from the neck down since a 2006 car accident during an expedition in the California desert. As a result, the expedition team has allowed the professor - who has become known as Korea’s Stephen Hawking - to hold all his meetings with them via satellite conference. That way, he can participate in the entire process from his home.

On June 19 during his call, Lee used a special mouse attached to his wheelchair that is operated by his breath to share data.

Before his accident, Lee was a researcher who actively conducted his work in the field. Before he was accepted to SNU, Lee spent seven years at the Korea Institute of Ocean Science and Technology and loved joining in on expeditions.

Circumstances have changed since then, but it hasn’t stopped him from pursuing what he loves. He frequently travels and has visited the United States, Germany, Britain and Japan, among others. “This is an era where an expedition that is 1,000 kilometers away can be made from one’s living room,” Lee said. “Information communication technology [ICT] is a gift from God to people with disabilities.”

He said he hopes to inspire young people with disabilities and to serve as proof that a career in science is still possible. In the meantime, however, Lee has more to discover.