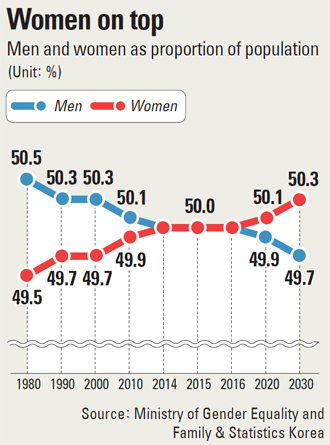 Song Ok-ran, 89, visits the senior citizen community center of her apartment complex every day. Of the 29 people who come to the center occasionally, 20 are women and only nine are men.

The Ministry of Gender Equality and Family and Statistics Korea estimated in a report released Thursday that Korea’s female population next year will be 25,315,000, surpassing the country’s 25,303,000 males. It is the first time the majority was held by women since statistics were first compiled in 1960.

Men used to outnumber women because of the traditional preference for sons over daughters. In the old days, sons were expected to take care of their elderly parents while daughters, after marriages, became a part of their husbands’ families.

In modern times, daughters have proven to be much better at taking care of aging parents than sons. It shows in the country’s gender ratio at birth, which has changed even in the last 14 years. The number of sons per every 100 daughters was 110.2 in 2000, but it dropped to 105.3 last year, coming into the natural range of 103 to 107.

“I was happy to hear that the baby in my belly was a daughter,” says Lee Hyeon-jeong, a 34-year-old woman due to give birth in October. “Recently, many couples hope for daughters and go as far as to share tips on how to have a daughter rather than a son.” 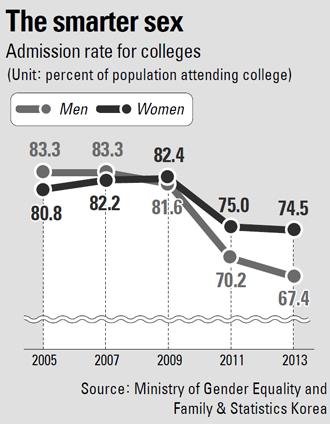 “It is global phenomenon that women have longer life expectancies,” says Lee Sam-sik, head of the Korea Institute for Health and Social Affairs’ Research Center for Fertility Policy, “apparently because men are exposed to more industrial accidents and habits that are bad for their health, such as drinking and smoking.”

The difference in smoking habits between Korean men and women is striking. The report said that only four out of every 100 women of the age of 20 or older were regular smokers in 2012, compared to 44.9 out of 100 men. On the subject of alcohol, 57.2 percent of women said they were regular drinkers compared to 81.9 percent of men in the same year.

Women started outpacing men in college entrance rates in 2009 and the gender gap has only widened. Last year, 74.5 percent of female students went on to college and universities, when only 67.4 percent of men did.

“In the past, male students outperformed female students in math and science, but they’re now even and girls are sometimes doing better,” says Chung Jae-young, a professor of education at the Ewha Womans University.

The trend is also showing in the examination to go into the civil service. On the foreign service examination, women outpaced men for the first time in 2005, and the ratio of women passing the test increased to 59.5 percent last year. Women accounted for 40.2 percent of those who passed the bar exam last year, up from 18.9 percent in 2000.

“It doesn’t mean a lot that women’s ratios have increased in the population because the social status of women still remains low,” says Kim Nan-ju, a researcher of the Korean Women’s Development Institute.

The activity rate - the percentage of people engaging in economic activities - for women last year was 50.2 percent, much lower than men’s 73.2 percent. The employment rate of women last year, at 53.9 percent, was also below the average for Organization for Economic Cooperation and Development (OECD) countries, which was 57.2 percent.