‘Fathers’ a pessimistic critique of society

‘Fathers’ a pessimistic critique of society 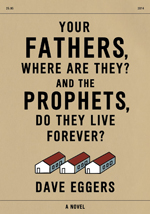 Your Fathers, Where Are They? And the Prophets, Do They Live Forever?, Author: Dave Eggers, Publisher: Knopf, Genre: Fiction

WASHINGTON - Dave Eggers is angry. A writer both beloved and criticized for his distinctly sentimental bursts appears to be seething, worried about crumbling institutions, lost privacy, diminished intimacy and humanity in general.

At least, that’s the impression left after digesting Eggers’s new, characteristically inventive novel, “Your Fathers, Where Are They? And the Prophets, Do They Live Forever?’’ Told through a series of dialogues on an abandoned military base somewhere in California, “Fathers’’ comes on the heels of two recent Eggers novels that have edged around the idea that something is fundamentally broken in American society.

If Eggers’ “A Hologram for the King’’ was an almost polite elegy for American industrialism and invention, and “The Circle’’ was a satire cloaking a serious warning about society’s growing reliance on technology, “Fathers’’ is a screaming, bleating cry for society to fix itself. It is a frothing, angry, mournful meditation on what is slipping away as America plows on into the 21st century.

Thomas is a youngish man who has been badly shaken by what, we learn, is a society he feels has failed him. Thomas feels wronged, and he is struggling to understand why institutions big and small - NASA, the police, his mother - have failed him and crumbled all around him.

Things have gotten quite desperate: As the novel begins, Thomas has kidnapped an astronaut, Kev, and chained him to a post on an abandoned military base. Thomas’ goal, if he is to be believed, is not to hurt Kev or anyone else but to ask some important questions; to figure out this mess.

Eggers’ decision to make “Fathers’’ a continuous dialogue is an interesting one. It intensifies the already manic qualities of his protagonist, Thomas, and makes for a lightning quick read. But it has its shortcomings - so much dialogue makes exposition difficult to execute without having it feel heavily stage-managed.

Some of the dialogue doesn’t really ring true, doesn’t feel all that real. It adds to the feeling that the point of this novel seems to be that it has an important point to make and not so much to tell a story. The plot is almost an appendage, albeit a compelling and at times suspenseful one.

As for the point Eggers is trying to make - it is a deeply pessimistic one. His society is a society at a loss, utterly perplexed by the serial traumas and changes it is enduring. Thomas is a bit crazed, a bit extreme, but he isn’t written as an outlier.

Thomas himself assures us there are many like him, normal people who are completely exasperated by modern society, drawn to extremes by growing income gaps and perceived slights and uncertainty of where they fit.

Great writing is about truth, and Eggers’ truth clearly is very gloomy. But from a writer often defined by his mirth and hopefulness, this is a distinctly pessimistic turn.