London needs to go on a diet

London needs to go on a diet 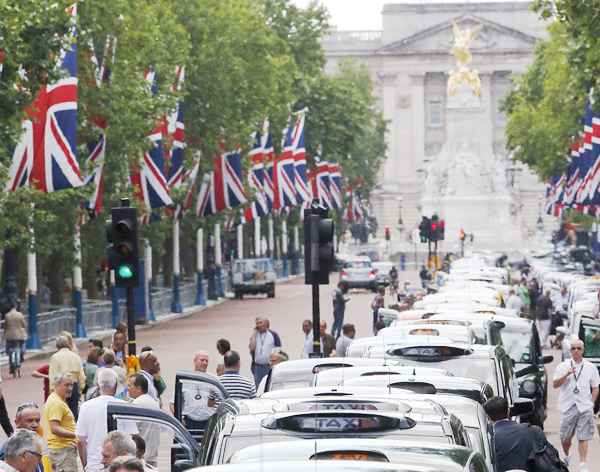 Taxi drivers join a demonstration along the Mall in central London earlier this month. Taxi drivers sowed traffic chaos in Europe’s top cities on Wednesday by mounting one of the biggest ever protests against Uber, a U.S. car service which allows people to summon rides from a smartphone app. [REUTERS/NEWS1]

U.K. government plans for a series of high-speed rail links to connect cities in the north of the country to the financially dominant southeast are a necessary, though insufficient, condition to help rebalance the nation’s economy. There needs to be a parallel shift moving more of the business of government away from London, a symbol of urban sprawl.

Chancellor of the Exchequer George Osborne said yesterday he’s considering a third high-speed rail line between Manchester and Leeds. That would be in addition to plans to run fast trains from London to the West Midlands, scheduled for completion in 2026, with a second phase heading further north that may eventually reach Scotland.

There are two reasons to applaud these ideas, which will cost a ton of money - phases one and two of the railway are budgeted at 42.6 billion pounds ($72 billion). First, Britain’s center of gravity needs to shift away from London for the good of the economy - call it Northsourcing. Second, London itself is hampered by aging and overused infrastructure.

The government has made a couple of half-hearted attempts to become less London-centric. It shifted the headquarters of the Office for National Statistics to Wales from London in 2008, and forced the state broadcaster BBC to move some production to Salford, Manchester. That’s about it.

Government job allocation outside of the capital has been almost non-existent. According to the Centre for Cities, a nonpartisan research organization, public-sector jobs grew by 6 percent in London between 2010 and 2012; the next biggest beneficiary was Manchester, which added 0.2 percent in state staff, while eight other large urban centers had declines of between 1.2 percent and 6.8 percent. Clearly, the enthusiasm for austerity and smaller government hasn’t been distributed equally.

Companies increasingly use technology such as video conferences to cut travel costs; government departments don’t need to be physically located in the capital city to interact efficiently. Only Edinburgh, Brighton and Liverpool added more private jobs than London between 2010 and 2012, according to the Centre for Cities. Forcing more government departments out of London would foster growth in the private sector.

Investment banks have realized the benefits of dispersion. JPMorgan has more than 4,000 workers in Bournemouth, 108 miles south of the capital; Deutsche Bank plans to double its staff of 1,000 in Birmingham, while Morgan Stanley’s second-biggest European office apart from London is in Glasgow, as my colleague Simon Kennedy reported last month.

Office rents in the City of London are as high as 65 pounds a square foot, according to broker Knight Frank; in Manchester, they are less than half of that, with even the ritziest buildings available at 32 pounds a square foot, according to real estate company Savills. And for staff, the average cost of a home in London is 485,000 pounds, compared with 222,000 pounds in the rest of the U.K.

London gets more crowded every year. The U.K. population will grow to 73.2 million by 2035, an increase of 17.5 percent from 2010, according to forecasts from the Office for National Statistics. London, meanwhile, is forecast to expand by 21 percent in the same period, cramming in almost 10 million people, according to the Greater London Authority.

And there are clearly skills to exploit outside of the capital. Londoners hold 74.6 patents per million head of population, compared with 84.1 for the U.K. as a whole, according to the Organization for Economic Cooperation and Development’s 2013 U.K. profile. The study also showed that just 53 percent of U.K. public investment is by local and municipal governments, compared with a global average of 72 percent.

Osborne said yesterday he proposes to make the north of England a “powerhouse” of the economy:

We need to bring the cities of the north together as a team - that’s how Britain will beat the rest. We must do much more to connect our northern cities.

In many ways, London functions as a city-state, its residents often ignorant of life in the rest of the country and its Westminster policy makers blind to the plight of the single parent in Leeds, the underemployed laborer in Newcastle or the sheep farmer in Cornwall. Improved transportation is a great start to knitting the regions more closely; scattering government offices around the country would lay the foundation for a more robust economy in the future.