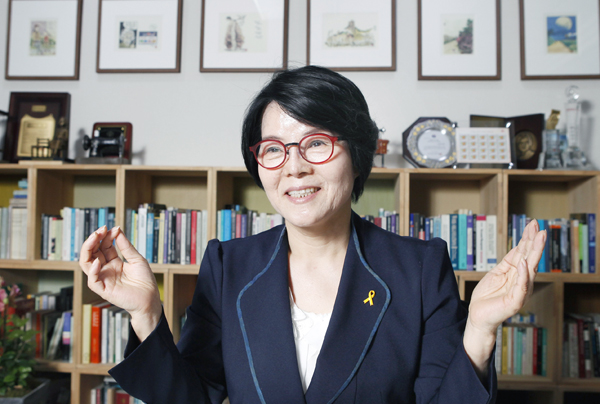 New Politics Alliance for Democracy Representative Chun Soon-ok talks in an interview Saturday at her office in the National Assembly. By Park Sang-moon

“I told [President Park] that she is virtually the only person in Korean politics who can reach out to those who suffered under authoritarian governments [in the 1970s and 80s] and realize true national unity because of the symbolism she carries [in modern Korean history],” said Chun Soon-ok, recalling a 30-minute conversation she had with Park on the presidential airplane earlier this month.

“After my comment, Park gave a big smile,” the first-term opposition lawmaker told the Korea JoongAng Daily in an interview on Saturday at her office in the National Assembly.

Chun accompanied Park on a six-day trip to Central Asia. The fact that the female lawmaker was chosen to represent the NPAD was highly symbolic both politically and personally for the lawmaker and the president, considering the family histories of the two women.

“Floor leader Park Young-sun recommended that I join the trip. I think she wanted me because both the president and I represent certain symbols [in modern Korean history] in the context of the country’s labor rights and democratic movement and its rapid economic development,” said the former labor activist.

The 61-year-old lawmaker’s older brother, Chun Tae-il, has long been a revered figure in the labor rights movement. In November 1970, the 22-year-old textile industry worker died after pouring gasoline over himself and setting himself on fire. His self-immolation was in protest of the inhumane working conditions experienced by garment industry workers at the time. The act was aimed at the Park Chung Hee government’s negligence in following through with labor laws.

Chun set himself ablaze after letters he sent to Park asking him to pay attention to intolerable working conditions in the garment sector went unanswered.

A cheap labor force under the strong guidance of the military regime in the 1960s and 1970s was the backbone of South Korea’s rise as a major economic powerhouse from the ruins of the 1950-1953 Korean War.

While Chun and Park are only a year apart in age, the lives of the two, who were both brought up in impoverished Korea after the 1950-53 Korean War, could not have been more different. While Park Geun-hye spent much of her adolescent years at the presidential residence, with her father wielding his iron-fist rule of the country, Chun Soon-ok began working as a textile industry worker when she was 15 years old.

“After my brother passed away, I had to provide for my family by working at a garment factory,” said Chung. “For at least two weeks a month, I worked from 8 a.m. through 4 a.m. the next day at a sewing machine.”

The lawmaker said she wanted to let the president know about the difficult lives of some people by drawing on her own experiences.

“I wanted to share my experiences with the president during the trip so that she would know about the hardships she might not have heard about, seen or experienced,” Chung said.

“The first thing I told her was about the importance of communication with people who may not agree with her. I told her she is and will be the only president who can bridge the gap between the conservatives and the liberals, especially those victimized during the country’s struggle for democracy.

“Former presidents Kim Dae-jung and Roh Moo-hyun both acknowledged sacrifices [of democratic activists during their terms]. But I think it will carry even more significance if Park steps forward to recognize their sacrifice and apologize for the pain inflicted by the government on them because of the symbolism she carries.”

Chun said that the controversy surrounding former Prime Minister-designate Moon Chang-keuk was weighing down on Park during the six-day trip, during which she was constantly briefed by her secretaries on the unfolding situation in Seoul, according to the lawmaker.

“It was visible that the president was very worried [about what was happening back home] with one revelation after another about Moon was reported,” Chun explained.

The lawmaker, who received her Ph.D in industrial relations from the University of Warwick in the United Kingdom, also said she gave the president suggestions to improve negative management-labor union relations, which are a particular worry among foreign businessmen.

“I asked her to invite leadership members from the two major industry labor unions, the Federation of Korea Trade Unions and the Korean Confederation of Trade Unions, to the Blue House and hold a discussion on resolving our strife-ridden labor-management relations, just like the discussion she had on deregulation earlier this year.”

Touching on the remainder of Park’s five-year term, Chun said, “I hope the president will heed my suggestions to bring about the kind of economic growth in which the vision and benefits could be shared by the people.”