Rep. refusing to rely on president

Rep. refusing to rely on president 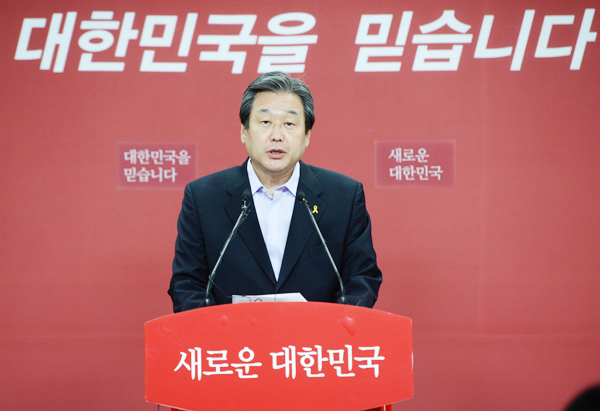 Ruling Saenuri Representative Kim Moo-sung vows to do his best for victory at the July 30 by-elections should he be elected as its chairman, during a press conference yesterday at the party’s office in Yeouido, western Seoul. [NEWSIS]

With Park Geun-hye’s approval ratings dropping in the aftermath of the Sewol ferry disaster, a high-profile Saenuri Party lawmaker has pledged to win the upcoming July by-elections without relying on the president’s influence.

Kim Moo-sung, who is also running in the ruling party’s leadership elections, told a press meeting that the Saenuri’s members “should not be helplessly relying on the president for the July 30 by-elections, like [we] did ahead of the June 4 local elections.”

“If I become the chairman of the party, I would put all of my efforts on the by-elections,” the Busan representative said in his campaign speech for the party’s leadership race, which is scheduled for July 14, ahead of the July 30 by-elections.

Kim, known as a close aide to the president in the past, pointed out that the latest polls show the ruling party’s approval ratings have fallen.

“Some members are already saying it wouldn’t be easy to win the by-elections,” Kim said. “We face a crisis with the dropping approval ratings and losing public support.

“We should nominate candidates who could win the by-elections,” he said, “and the nominations should be done fairly.”

A recent Gallup Korea poll that surveyed a total of 1,007 adults between June 24 and 26 showed that only 42 percent of the respondents felt positive about the president’s recent performance, while 48 percent said they did not.

The approval rating was just one percent above Gallup’s previous poll, in which the president hit 41 percent, her lowest ever. In that poll, however, the number of respondents who disapproved of the president was only about 30 percent.

The ruling party is also concerned about losing the support of young voters.

According to a Saenuri Party survey of 1,695 university students nationwide between June 9 and 14 after the June 4 local elections, which was exclusively obtained by the JoongAng Ilbo yesterday, 40.4 percent of the respondents chose the Saenuri as the political party they dislike the most.

In the same poll, the Unified Progressive Party received 21.4 percent and the main opposition New Politics Alliance for Democracy Party only 2.9 percent.

The dropping approval rating for the ruling party and the president came after two prime minister candidates, prosecutor-turned-lawyer Ahn Dae-hee and former JoongAng Ilbo journalist Moon Chang-keuk, gave up their nominations. This came at an urgent time when the Blue House has been under pressure to pick the right person to reform the corruption-ridden administration after the ferry accident.

Ahn faced controversy over the excessive income he earned as a lawyer after retirement, which is regarded as a moral issue in Korea. Moon, a devout Christian, triggered public anger through a past comment on Japan’s colonial rule of Korea, which he called “God’s plan.”

“After the Sewol ferry disaster, Park suffered several crises she did not experience before, and that triggered concerns about her leadership,” said Ga Sang-jun, a politics professor at Dankook University. “The matter of her leadership is linked with her failure to communicate with other officials and nominating a new prime minister, but she appears to show no efforts to overcome her problems.”

The crisis for Park lies not only in criticism from opposition politicians but also in the rising disapproval from conservatives, said Bae Jong-chan, an analyst at the Research and Research, a polling company.

“Although there were several controversies over the nomination for prime minister, President Park has just backed off from all the controversies,” Bae said. “She did not make any explanations on the nominations directly and that lost many supporters from the eligible voters in their 50s or the conservative residents in Gangnam areas.”