A little while after midnight on June 20, a drunken man on the platform at Hansung University Station abruptly stopped and unzipped his pants.

As it happened, Deputy Stationmaster Yoon Je-hun was making his way downstairs to alert commuters that there would be no more trains for the night.

“This is not a restroom!” Yoon and another station employee shouted as they ran up to him, but their orders were to no avail.

That day, station employees caught five people who attempted to urinate in the subway station. Last year alone, a total of 1,163 people were caught while trying to urinate in Hansung University Station, the highest rate among all the subway stops on lines No. 1 to 4.

“We are at war every night because of people who try to pee in the station - even when we are standing right next to them,” Yoon said. 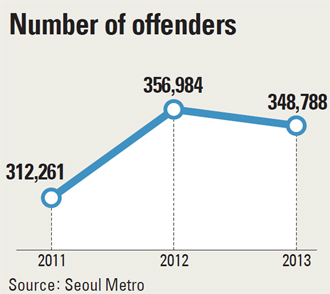 There are various kinds of “subway outlaws,” he continued. Some are drunk, and some try to force their wares on passengers. And then there are others who secretly take photographs of women.

From time to time, they’re publicly shamed for their misbehavior, which is posted and shared on social networking services. However, those instances are few and far between.

According to Seoul Metro, the operator of lines No. 1 to 4, subway sheriffs and police recorded more than 300,000 cases of misbehavior in subway stations or on subway trains in 2013. Offenders are required to pay a fine, and the amount increases with repeated violations.

First-timers pay 25,000 won ($24.50), while those who defy regulations a second and third time must cough up 50,000 won and 100,000 won, respectively. The type of violations tends to vary by station, officials say, though penalties are difficult to enforce and are rare.

Seoul Station, which has the second-largest vagrant population in Seoul, had the most instances of peddling, begging, smoking and sexual crimes. The long elevator that connects the subway station and the train station is also reportedly a hot spot for ne’er-do-wells who attempt to secretly snap photos of passing women. About two to three voyeurs are caught each day.

Euljiro 1(il)-ga Station ranked first in terms of the number of homeless caught. The actual number of homeless people is less there than at Seoul Station, however, the population tends to frequent Euljiro 1(il)-ga at a higher rate because it’s open 24 hours and has decent restrooms. In 2013, there were 7,282 cases in which homeless people were caught at Euljiro 1(il)-ga. Danggogae Station, at the northern end of subway line No. 4, is notorious for drunks, whose number tops more than 20,000 annually. It is a daily routine for employees at the terminal to go around waking up to those who have passed out.

After first dispatching subway sheriffs in 2011, Seoul Metro ended up doubling their number to rein in the increasing rate of miscreant behavior.

Some say it is difficult for sheriffs to reprimand violators because they have no legal authority. Some have even been beaten by drunken passengers.

But perhaps the biggest problem is that offenders are only handed minor punishments, said Kim Won-chul, secretary general of the National Council for Better Korea Movement.

“Subway sheriffs should be provided with legal authority,” he said, “and the penalties on those who disrupt public order should be heavier.”