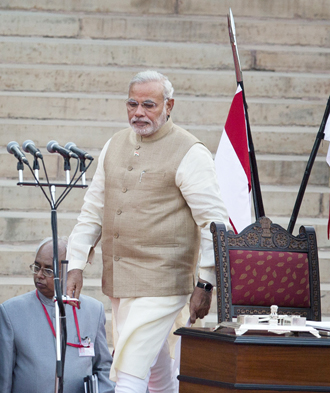 CAMBRIDGE, Massachusetts - India’s recent general election could be the most important positive economic event of 2014. Indian voters decisively rejected the Congress party, which had governed India virtually without interruption since it gained independence from Britain in 1947. They are likely to be happy they did.

Sonia Gandhi, the head of Congress and the widow of former Prime Minister Rajiv Gandhi, has been the power behind the throne since 1998, turning Prime Minister Manmohan Singh into little more than a figurehead. Under her leadership, Congress has pursued a populist agenda that increased transfer payments and reduced India’s annual economic-growth rate to less than 4 percent in 2013. GDP per capita is still only about $4,000, less than half the level in China.

The newly elected prime minister, Narendra Modi, campaigned on a platform that promises to deliver to India as a whole the rapid growth in employment and income that the state of Gujarat achieved when he was its chief minister. Under Modi’s leadership, Gujarat became a business-friendly state that expanded economic activity, and attracted business investment from both Indian and overseas companies.

A remarkable feature of the recent election is that Modi’s Bharatiya Janata Party (BJP) received an absolute majority in the national parliament, an almost unprecedented achievement in India. As a result, Modi will not have to compromise with the other national or regional parties to pursue his legislative agenda.

Two key officials will help Modi manage his economic program. The new finance minister, Arun Jaitley, is an experienced political leader who served in ministerial positions in previous BJP governments. Jaitley is also known as a strategic thinker who is sympathetic to business interests. The head of the Reserve Bank of India (the central bank) will continue to be Raghuram Rajan, a distinguished economist who has already shown his desire to reduce India’s near-double-digit annual inflation rate, and to reform some of the inherited counterproductive restrictions on the country’s financial sector.

The measures needed to stimulate economic growth will take time to implement and to produce results. But anyone who wants to see whether the new government is acting to achieve faster long-term growth should examine whether progress is being made in the following 10 policy areas.

Education. Although India has excellent institutions of higher education and technology, only a small share of the population can take advantage of the opportunities they offer, because primary and secondary education is so inadequate. Only 60 percent of the adult population can read and write at an elementary level. Teachers themselves are poorly educated, and many are so unmotivated that they do not even show up at the schools where they are supposed to work.

Infrastructure. India needs better roads and ports to enable efficient transport of products domestically and to the rest of the world. The recent expansion of private airlines and airports shows what private firms in this sector can accomplish.

Fiscal consolidation. Large budget deficits are absorbing the national savings that should be used to expand business investment, and are increasing the national debt that will have to be financed by future taxes.

Privatization. The enterprises owned by the Indian government in manufacturing and other sectors operate inefficiently and often produce losses that absorb national saving. Selling off these enterprises would contribute directly to accelerating the pace of economic growth.

Removal of subsidies. Subsidized electricity and fuel leads to wasteful overconsumption and contributes to the fiscal deficit. Though these subsidies are politically difficult to eliminate, they should be replaced by cash transfers, which can now be done efficiently in India, owing to a remarkable new system of fingerprint-based cash transfers.

Agricultural reform. In the current system, the government buys, warehouses and distributes agricultural products. As a result, an enormous amount of goods are spoiled in storage, while production incentives are misdirected. Agricultural markets should be privatized.

Relaxing limits on foreign investment. Foreign firms are now barred from majority ownership of banks and insurance companies. Relaxing such restrictions would strengthen the financial sector and play an important role in economic growth.

Tax reform. India’s complex system of national and state sales taxes distorts domestic trade. Replacing these taxes with a national value-added tax and using revenue-sharing to the states has been long debated and should now be enacted.

Corruption. Major cases of high-level corruption have undermined economic confidence and impeded official decision-making. India is also handicapped by small-scale corruption, with bribery a common feature of all forms of business and personal transactions. The government should crack down on instances of high-level graft and use the new system of cash transfers to limit the scope of petty corruption.

The Indian stock market is up about 20 percent this year in anticipation of stronger growth and rising profits. Now it is up to Modi and the BJP to show that they can deliver on their campaign promises.

*The author is a professor of economics at Harvard University and president emeritus of the National Bureau of Economic Research.