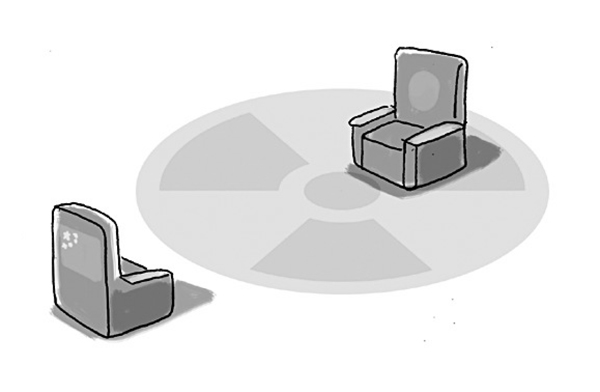 
Chinese President Xi Jinping’s visit to South Korea this week has raised expectations at home along with interest from abroad. He will be the first Chinese leader to visit Seoul before Pyongyang since normalization of ties between South Korea and China in 1992. The two countries are expected to seize the unprecedented moment of affinity and upgrade inter-government status from the current “strategic cooperative partnership” to “comprehensive strategic cooperative partnership,” placing it on par with Sino-Russian diplomatic ties.

Xi has broken the long-held tradition between Beijing and Pyongyang in which a new Chinese leader makes a visit to Pyongyang, its sole ally, before Seoul. Since Park Geun-hye and Xi Jinping took office in early 2013, the two leaders have met four times. But Xi has never met Kim Jong-un, who succeeded to power after his father died in December 2011. The blooming Seoul-Beijing ties may accelerate free trade talks, business cooperation, and build a joint front against Japan on historical provocations.

But it may be premature to celebrate a new stage in bilateral ties. Despite his charm offensive towards South Korea, Xi has never veered away from Beijing’s basic stance on the Korean Peninsula and Korean affairs - which is to work toward denuclearization, peace and stability through dialogue and negotiations. Seoul is working for those end goals, but it differs from Beijing on the means to those ends.

Seoul is more impatient than Beijing on this process. It wants Beijing to take its side more and use its influence over Pyongyang to achieve a breakthrough in inter-Korean and nuclear issues. Seoul wants to regularize tripartite talks with Washington and Beijing. Daniel Russel, assistant secretary of state for East Asian and Pacific affairs, recently said China should demonstrate a more active role to influence North Korea during summit talks in Seoul. But Beijing rarely takes advice from anyone or any country.

Seoul and Beijing are poles apart on the North Korean nuclear problem. Beijing insists on a three-stage solution - first on the inter-Korean level, then through U.S.-North Korean negotiations, and finally expanded six-party talks. If North Korea refrains from any further provocation such as a fourth nuclear test, China suggests all three negotiation stages take place simultaneously for quicker results. It advises the concerned parties to lower the bar for North Korea to join diplomatic talks by avoiding unnecessary provocations such as joint South Korea-U.S. military drills and by reopening the six-party platform immediately without any conditions attached.

Seoul and Washington, however, maintain that they won’t talk with Pyongyang unless it comes with a sincere attitude and commitment to disarmament. Washington has turned more hawkish and wants Pyongyang to meet all the bilateral agreements reached in February 2012 and free imprisoned Korean-American missionary Kenneth Bae. It also wants it to remove the mention of being a nuclear state from the North Korean constitution. Naturally Beijing is not happy with Washington’s intractability.

Instead Beijing has been supportive of President Park’s vision to balance foreign affairs through a multi-country security cooperative pact and a lasting peace framework in Northeast Asia. In an opening address at the Shanghai summit of the Conference on Interaction and Confidence Building Measures in Asia in May, Xi stressed a common, comprehensive, cooperative and sustainable security pact and proposed building a regional security body.

His vision is in sync with Park’s. But Seoul cannot expect to get actively involved in a China-led regional security pact. First of all, Washington eyes such a security network with suspicion as it would undermine U.S. influence in the region. Recently, Washington bluntly told Seoul not to join a new regional development bank led by China. Last October, China proposed the creation of the Asia Infrastructure Investment Bank to help underdeveloped areas in the region without including traditional regional donors U.S. and Japan. Seoul would risk angering its traditional ally if it joins China-led international initiatives.

Xi’s upcoming visit to South Korea will likely be meaningful in many ways. The summit with Park will likely publicly demonstrate a newfound affinity through stronger wording in a joint declaration. But summit rhetoric won’t effectually change bilateral ties if it’s not followed by real working-level actions. Behind a celebratory tone or mood, we must coolly take into consideration the structural stumbling blocks in our bilateral relationship.