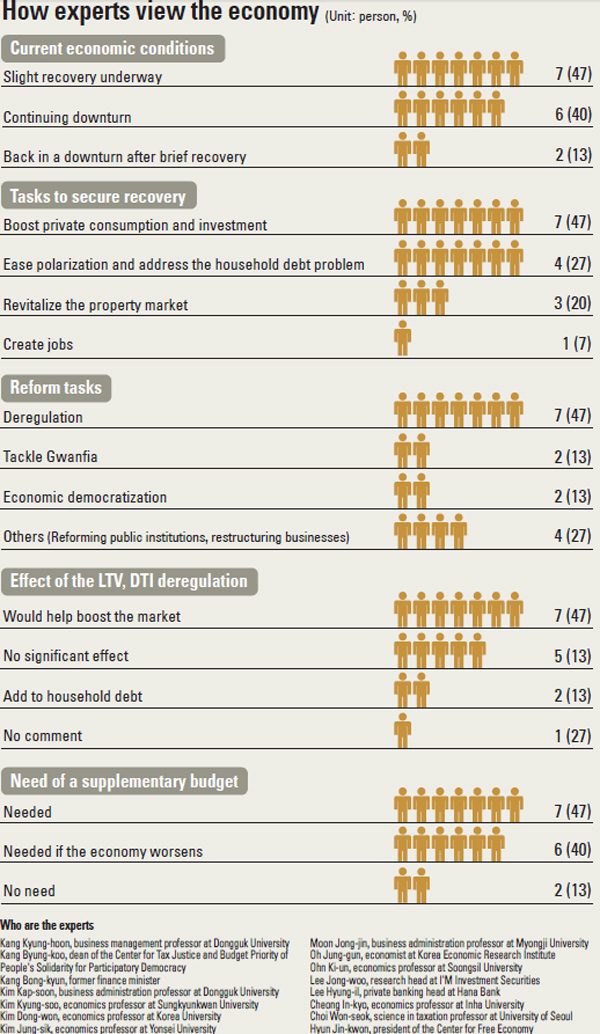 Choi Kyung-hwan, nominee for the post of deputy prime minister for the economy and finance minister, must be feeling a lot of weight on his shoulders, given the myriad of tasks he must undertake to put the economic recovery back on track.

The JoongAng Ilbo conducted a survey of 15 economic analysts in the country in order to make the second economic team of the Park Geun-hye government aware of their mission before taking office.

The experts called for major economic reforms and measures to boost consumption and investment.

The Korea Development Institute, a state-run economic think tank, recently downgraded its growth forecast for the year by 0.2 percentage points as the pace of economic recovery slowed in the first half of the year due to sluggish private consumption and investments.

Against this backdrop, the analysts said that the actions of the new economic team will be crucial in determining the trajectory of the economy as it reaches a watershed moment. It will either continue its current pace of recovery or slide back into a downturn.

The first task suggested by the experts was reforming regulations, the survey showed.

“To continue the economic recovery, the real estate market needs to be revived and businesses should increase investment,” said Kim Kyung-soo, a professor of economics at Sungkyunkwan University. “But the starting point of that should be deregulation.”

If current rules and regulations remain, it is difficult to expect aggressive investment and private consumption, he explained.

The analysts said reforms in the public sector and additional plans for economic democratization are needed, too. Other priorities included tackling the wealth gap, addressing household debt, revitalizing the property market and creating jobs.

As for easing the loan-to-value (LTV) and debt-to-income (DTI) ratios, which Choi has mentioned, the analysts were divided.

Forty-seven percent said eased LTV and DTI rules would boost the market, but 46 percent said the deregulation would lead to an increase in household debt.

“Adjusting the ratios by region or age group will help restore confidence in the market,” said Ohn Ki-un, an economics professor at Soongsil University.

“The reason the United States and Japan loosen their monetary policy is to elevate asset values in order to recover consumption,” said Kang Bong-kyun, a finance minister during the Kim Dae-jung administration. “Demand for purchasing houses should be increased first to create a beneficial economic cycle.”

But Lee Jong-woo, an analyst at IM Research Investment Securities, had a negative outlook on deregulation.

“The recent depreciation of housing prices is a structural change in line with the changing demographic structure,” Lee said. “So there will not be many people who are willing to buy houses because they think housing prices wouldn’t go up even if they can buy one with more loans.”

More experts were pessimistic about the current economic conditions than optimistic, the survey showed. More than half, or 53 percent, of them said the economy is likely to backtrack. About 47 percent said the economy will slowly recover.

“The government should prepare an extra budget in order to stimulate investment and consumption,” said Kim Dong-won, an economics professor at Korea University.