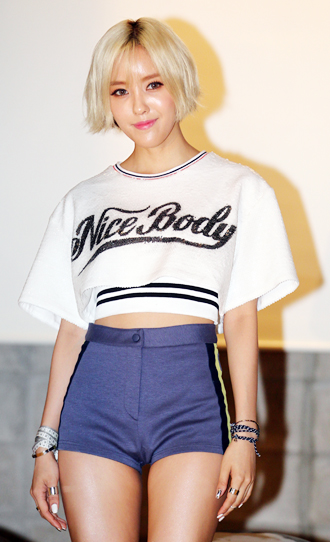 Hyo-min from girl group T-ara launched her solo project yesterday and held a press conference for her new album “Nice Body” at JBK Convention hall in Samseong-dong, southern Seoul. Hyo-min is the second member of the group to go solo, after Ji-yeon.

“This is the first time I have ever had a press conference by myself,” said Hyo-min.

Her first mini-album, which was released yesterday at noon through online music outlets, contains three tracks, including the hip-hop-influenced lead song of the same title, which she collaborated on with renowned producer Brave Brothers. The rapper Loco is featured in the song as well.

Hyo-min explained that she considered “confidence” as the most crucial factor for her solo performances.

“In order to gain more confidence, I cut my hair short and dyed my hair in the brightest color that I have ever done so far,” said Hyo-min.

“I hope the audience will see that I am not afraid to go through challenges.”

Hyo-min will showcase her first live performance on Thursday through Mnet’s “M! Countdown.”