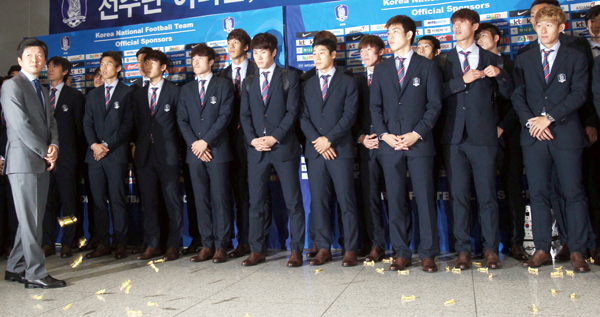 Korean national football team members react as pumpkin yeot (Korean taffy) is thrown at them by angry fans as they were greeted by Korea Football Association Chairman Chung Mong-gyu, left, at Incheon International Airport yesterday. “Eat yeot” is an offensive slur equivalent to “screw you.” By Jung Si-jong

Korean national football team Coach Hong Myung-bo and his 23 Taegeuk Warriors probably did not expect a warm reception when they arrived at Incheon International Airport yesterday.

But as they exited the airport at around 5 a.m., about 200 fans greeted the players and coaching staff and waited for Coach Hong to begin a press briefing while his squad lined up next to him for a photo.

At that moment, the team became the target of a volley of pumpkin yeot (Korean taffy) thrown by a small group of fans yelling “Eat yeot!” and “Shame on you!” Some of them also held signs, one of which read “Korean football is dead.” Fortunately, their bad aim meant no Korean team member was struck by the candy.

In Korean, the phrase “eat yeot” is an offensive slur equivalent to “screw you,” which originated in the 1960s when students protested against the Education Ministry over a question on their school exam regarding how the taffy is made.

It was obvious that Coach Hong, Chung Mong-gyu, the chief of the Korea Football Association, and the players were embarrassed by the incident. They watched as security guards restrained the rogue fans, then stared down at the candy strewn on the floor.

Some of the fans, mostly women, criticized the aggressive supporters and comforted the players, saying, “It’s OK, we can do better next time,” and “Son Heung-min, you did a great job.”

“We threw the candy because they [the national team] screwed us,” said Cho Ho-yeon, who introduced himself as a member of the online group “We lost because of you.”

“We need to totally reform Korean football from the beginning. They run the team like the mafia. The coach favored the particular players that he likes and some of the players were selected because they went to the same university as the coach. I can’t see a difference between the coach and members of the ‘gwanfia,’” he said. Gwanfia is a term combining the Korean word for government official and mafia.

Cho said the online group has 500 members and that about 10 people went to the airport to express their disgust with the team’s performance.

The homecoming was much more subdued than when the team returned after losing in the Round of 16 in the 2010 South Africa World Cup. Korea finished the Brazil event with a record of one draw and two losses.

When Hong announced his 23-man roster for the tournament, many questioned his choices, which included many players from the 2012 London Olympics squad, which he coached. He also picked players who rarely played for their club teams. Those European league players struggled in Brazil, leading to calls for Coach Hong to step down. The 28-year-old striker Park Chu-young and the coach both graduated from Korea University and 12 of the London Olympics team members went to Brazil.

“We apologize for the outcome we made in Brazil,” Coach Hong said at the press conference. “We know how much the entire nation supported us during the event, but we couldn’t respond to the expectations. As you know, they are young players and I think the experience in the Cup must have been a good lesson for them to become better players. Since they still have a future to deal with, I want them to do their best wherever they go.”

When reporters asked the coach whether he will resign from the post, he refused to give a clear answer.

“I don’t think I can answer that question now,” Hong said. “I’m very tired because I was on a plane for a very long time. I thought about the issue a little, but it’s a hard decision to make.”