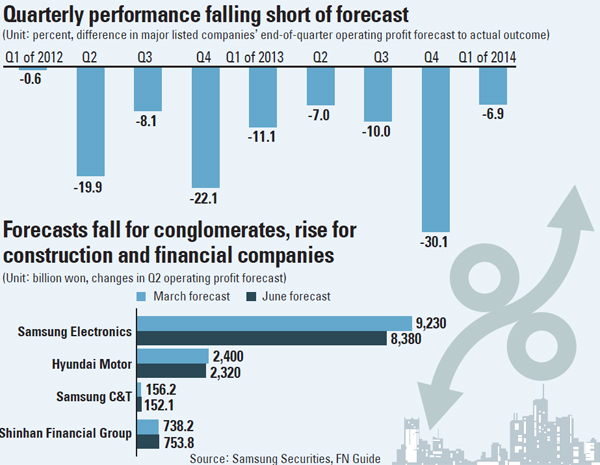 As Korean companies listed on the Kospi prepare to announce their second quarter operating profit, the nation’s benchmark stock index has hovered around the 2,000 mark and the Yeouido securities sphere is strained.

The atmosphere is largely due to what market insiders call “trauma,” in which the market turns sluggish after falling behind its performance forecasts for the past few years.

Many local securities firms are inching down their second quarter forecasts by an average of 14 percent from earlier in the year.

“The actual performance could turn out to be about 10 percent lower than currently forecast, as our experiences have shown in the past few years,” said Yoo Seung-min, head of the investment strategy team at Samsung Securities.

Market bellwether Samsung Electronics’ tentative performance report, scheduled to be revealed July 4, will be the first warning of a declining trend.

The local securities market forecast in early April that the nation’s largest conglomerate’s operating profit will stand at 9.23 trillion won ($9.1 billion), which has now been revised down to 8.38 trillion.

“Samsung’s profitability has slowed down as its competition has recently become more intense in the cutting-edge smartphone market,” said Jin Seong-hye, an analyst from KTB Investment and Securities. “Its sales in less expensive models are also estimated to fall short as phone manufacturers in emerging economies started producing more quality models.”

The strong won is also influencing the slowed performance, as analysts expect that the Korean currency’s bullishness will influence the performance of the nation’s major conglomerates such as Hyundai Motor and Kia Motors in the second quarter.

Hyundai Motor’s operating profit is forecast to be about 2.32 trillion won, lower than the 2.4 trillion won that was predicted in the period last year. Some firms recently rolled out a lower forecast of 2.2 trillion won, saying the company’s sales may be overshadowed by the strong won.

Hyundai Motor’s per-share price dropped more than 10 percent over the past few months.

The securities market has long debated the consequences of a strong won. Some predicted that it will directly harm the nation’s exports, while others said Korean conglomerates are not as sensitive to the exchange rate now as they were before.

“Because it is quite difficult to accurately predict the affect of the exchange rate, analysts so far have not been able to reflect it into their quarterly performance forecast,” said Yoo from Samsung Securities. “But there is a possibility for us to drastically drop the forecast if the currency’s impact on electronics and auto sectors turns out to be larger than our expectation.”

But a few companies are eagerly awaiting their performance, such as SK Hynix, which has been buoyed by the cutting-edge memory chip boom.

LG Electronics, which was recently revived by its G3 smartphone, has seen its quarterly forecast jump from 437 billion won in early April to 525 billion won recently.