Lewis wins by 1 stroke in Arkansas

Lewis wins by 1 stroke in Arkansas 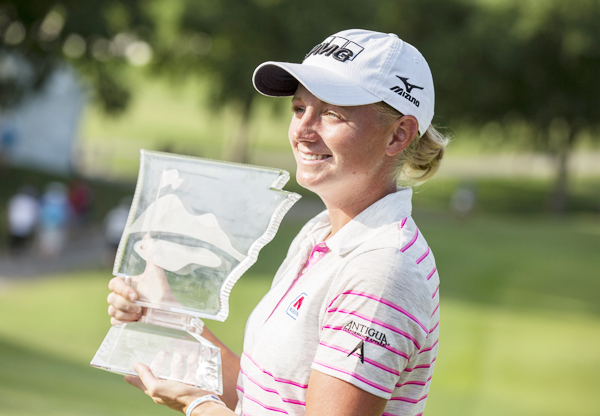 Stacy Lewis holds the trophy following the final round of the NW Arkansas Championship golf tournament on Sunday in Rogers, Arkansas. [AP/NEWSIS]

Stacy Lewis made a 7-foot birdie putt on the final hole to win the NW Arkansas Championship by one stroke Sunday.

The top-ranked Lewis, who played at the nearby University of Arkansas, earned an unofficial win in the rain-shortened 2007 tournament as an amateur. On Sunday, she closed with a 6-under 65 for a one-stroke victory.

Lewis birdied three of her final holes for her third LPGA Tour victory of the year and 11th overall. She finished at 12-under 201 at Pinnacle Country Club.

Lydia Ko, Cristie Kerr and Angela Stanford tied for second. Ko finished with a 65, and Kerr and Stanford shot 67.

Second-round leader Michelle Wie shot a 73 to tie for eighth at 8 under.

Kerr had a chance to match Lewis at 12 under with a 30-foot birdie putt on the 18th. However, her putt came up short.

Then, after Ryu So-yeon failed to make an eagle on the final hole, Lewis’ win was secured. Ryu ended up fifth at 10 under after a 69.

Lewis won the ShopRite Classic this month as well as the North Texas Shootout in May.

The two-time major winner has long said, though, how much pressure she felt to win in Arkansas - where she was a four-time All-American in college and is greeted throughout rounds by calls of “Woo Pig Sooie.’’

She was tied for the lead entering the final round last year before finishing in a tie for fourth, but her final birdie spree secured her sought-after win Sunday.

Wie began the final round with a two-shot lead after back-to-back 5-under 66s, but she missed short birdie putts on the first two holes and struggled to a 1-over front nine - capped by a three-putt bogey on the ninth.

The whirlwind media tour following last week’s win at the U.S. Women’s Open appeared to finally catch up after that with Wie, who followed with bogeys on numbers 10 and 11 to effectively end her contention. She finished with 35 putts after needing 28 the first round and 29 in the second.

Lewis began the tournament 2 over after her first four holes Friday, but she closed by shooting 14 under over her final 68 holes.

She took advantage of the opening with Wie’s stumble and vaulted into the solo lead at 11 under with a birdie on the par-4 16th.

Ko and Kerr answered with birdies to climb back to part of a three-way tie at 11 under, but Lewis had the last answer - a 7-foot left-to-right birdie putt on No. 18 that resulted in a huge ovation from the pro-Arkansas gallery and a fist pump and sigh of relief from Lewis.