This time, there is no motivation

This time, there is no motivation 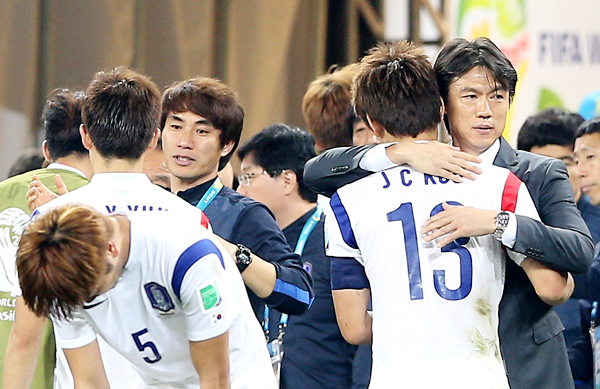 On June 14, 2002, Korea defeated Portugal 1-0 in the group round of the Korea-Japan World Cup and advanced to round 16. That night, President Kim Dae-jung visited the team. Captain Hong Myung-bo told him that the team’s younger members were concerned about mandatory military service.

The next day, 146 lawmakers proposed a revision to the military service act, and on June 16, the defense ministry spokesman announced that the members of the national squad would be exempt from military service. It took only two days from Hong’s request for the exemption to be finalized.

Ten years later, in the 2012 London Olympics, Hong led the Olympic squad as a head coach, and Kim Gwang-seok’s song “Private’s Letter” was played on loop in the locker room. The members were determined to win a medal in the Olympics, which would grant them all an exemption. In the quarterfinal, Korea beat out host nation England in a penalty shoot-out and defeated Japan in the third-place match, 2-0. Foreign media pointed out that a military exemption was Korea’s biggest motivation to defeat teams that were objectively more dominant.

Hong called the Olympic team members again in the 2014 World Cup. But that same desperate fighting spirit just wasn’t there this time. Four years ago in South Africa, Korea played Uruguay in the Round of 16, and the Uruguayan head coach said that he was impressed by Korea’s straightforward style.

“The players are not as desperate as they were for a medal in the London Olympics,” said football legend Cha Bum-kun, “but Hong seems to have taken the difference lightly. The fans are most disappointed because the players didn’t seem to earnestly want to achieve anything in the World Cup.”

In this World Cup, rewards among some nations have become controversial. Ghanaian players were kissing the stash of cash they were awarded by the government, while players from Cameroon were playing halfheartedly in protest of their unsatisfying bonus. Perhaps, the media will find Korea’s promise for military exemption just as amusing.

But now we need to find motivation from somewhere else. Professional football players need to fight for their glory and honor, to be the best in their field, to make the nation proud and to be desperate to keep that pride. If such a culture is yet to be established, they should watch “Forever the Moment,” a film about the women’s handball team, and at least be inspired by their patriotic spirit.

*The author is a national news writer for the JoongAng Ilbo.