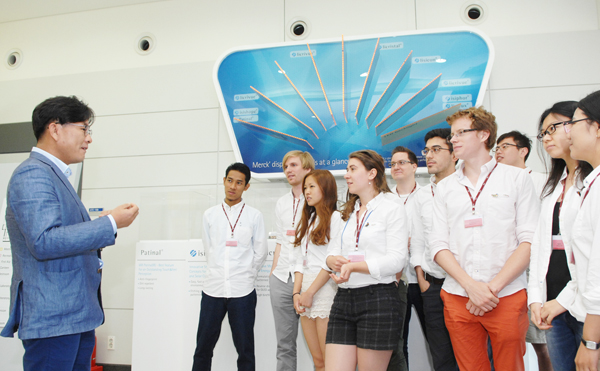 A group of foreign students listen to an introduction by an executive at the Advanced Technology Center of Merck Korea in Pyeongtaek, Gyeonggi, during a tour hosted by Invest Korea, on Thursday. Provided by Merck Korea


PYEONGTAEK - Merck Korea, the local branch of one of the largest chemical and pharmaceutical groups in the world, runs an extremely tough security check at the entrance of its R&D and production site in Pyeongtaek, Gyeonggi.

“Since we maintain a very close relationship with our customers, we keep the security level as high as the customers would want,” said Merck Korea CEO Michael Grund at the site.

The students had to receive security checks at the main entrance and put stickers on their smartphone cameras in order to prevent them from possibly photographing any part of the R&D site.

They were excited to see a “mini-Germany” reflected in the company’s main facility in the small city in Gyeonggi, about 70 kilometers (43 miles) south of Seoul, where every aspect and rule is the same as in Merck’s German branch.

“As we prioritize both security and safety, we have safety rules, exactly the same as the ones being applied in Germany,” Grund said.

In 2008, Merck Korea invested 14 billion won ($13.83 million) to build the center, called the Advanced Technology Center, and it opened in May 2010. The center was created to help the company meet customers’ demands and respond to changes in the LCD market, in which Korea is a leader.

On the 6,000-pyeong (213,500-square-feet) area, Merck Korea has a plant for manufacturing its flagship LCD materials and pigments for home appliances, electronics and vehicles, and a high-tech R&D center for cutting-edge technologies.

“Since there are many important clients here, it is crucial for us to have both R&D and production facilities in one place, because our clients don’t want to do it elsewhere,” Grund said.

After the tour, the students said the center was strict and professional.

“I found them very professional in the way they run this site,” said Joseph Nes, who is studying at Seoul National University. “Besides the business aspects, I was impressed by Merck’s social inclusion projects, suggesting that they are doing a lot in Korea.”