Koreans get much more positive toward China

Koreans get much more positive toward China 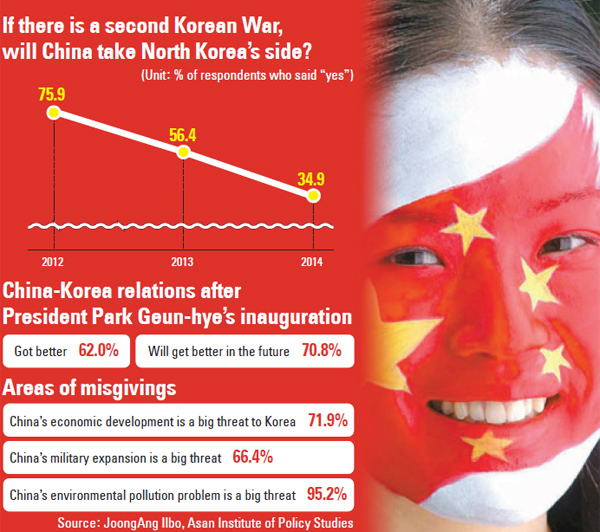 Just over a third of South Koreans, or 34.9 percent of adults, think that China would take North Korea’s side if a second Korean War broke out, according to a recent survey.

In a similar poll conducted in 2012 during the Lee Myung-bak administration, 75.9 percent of Koreans surveyed believed China would back Pyongyang in case of another war on the peninsula.

Chinese President Xi Jinping is scheduled to arrive in Seoul for a two-day state visit on Thursday. Ahead of his visit, the JoongAng Ilbo and the Asan Institute for Policy Studies conducted a joint survey on South Korean public sentiment on key bilateral issues with China, such as North Korea’s nuclear program, the unification of the Korean Peninsula and security cooperation.

The survey results showed an overall increase in positive attitudes by South Koreans toward China, especially after its once-tight relationship with Pyongyang has cooled recently.

As an indicator of this trend, Liu Jianchao, China’s assistant minister of foreign affairs, said there was “no military alliance” between Beijing and Pyongyang in a meeting with Korean reporters in Beijing in mid-June.

Likewise, 60.8 percent of Koreans polled said that China is a partner for “cooperation,” while only 32.7 percent labeled Beijing a “rival” country.

Even after Beijing unilaterally declared a new air defense identification zone (ADIZ) in the East China Sea last November, resulting in an international backlash, more than half of Koreans polled, or 51.1 percent, thought of China as a “cooperative” partner rather than “a source of rivalry” in a poll that was taken the following month.

Similarly, 81 percent of people polled said they “supported cooperation in security” with China, indicating that they think Seoul’s security is not just restricted to its traditional alliance with the United States, and that cooperation with China is also needed.

With the upcoming summit between President Xi and President Park Geun-hye, South Koreans said that the North Korean nuclear problem was the No. 1 issue that Seoul and Beijing need to cooperate on.

North Korea’s nuclear issue was the most prominent issue for the upcoming summit to 53.6 percent of respondents, while 34.4 percent said China “should play a leadership role” in resolving the issue. This is higher than the 33.7 percent who thinks South Korea should lead and the 22.5 percent that thinks the United States should take charge.

Likewise, on the issue of unification, 82.4 percent of those surveyed think that “China’s help is needed for unification and peace-building on the Korean Peninsula.”

At the same time, 68.1 percent of Koreans surveyed responded that “China does not want a unified North and South Korea.”

Despite growing trust and blossoming diplomatic relations between the two countries, there still remain areas of misgivings.

China likewise has misgivings about South Korea especially on its security alliance with Washington and tendencies of slighting Chinese people, according to the Seoul-based Northeast Asian History Foundation. While the Chinese are generally supportive of the Hallyu wave of pop culture exports like music and movies, Korea’s IT boom and cultural exchanges between the two countries, they still hold the attitude that historically Korea is the weaker nation compared to China, a superpower.