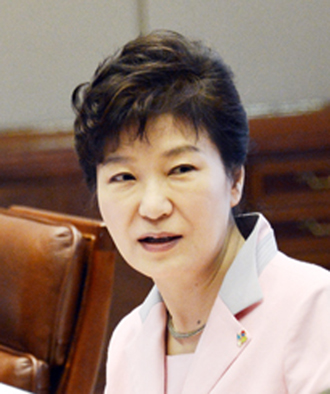 President Park Geun-hye said yesterday she tried to find a prime minister to meet the needs of the times as a replacement for Chung Hong-won but failed, explaining publicly for the first time why she did not name a third nominee.

She said she doubted anyone could survive the kind of personal attacks faced by her two failed nominees.

The president’s comments came at a biweekly meeting with her senior secretaries, which was held for the first time since June 2. The June 16 meeting was cancelled due to Park’s trip to Central Asia.

Yesterday’s meeting drew attention because Park had shied away previously from public comments about the withdrawal on June 24 of Moon Chang-keuk, the second prime ministerial candidate she nominated, and her decision two days later to keep on Prime Minister Chung, who had tendered his resignation to take responsibility for the April 16 Sewol ferry accident.

The president has also been under escalating pressure to explain her side of the story by the main opposition New Politics Alliance for Democracy (NPAD).

“I promised to the people that I would realize a large-scale remodeling of the nation and build a new system for public safety,” Park said, “but I decided to have Chung Hong-won remain in office since I could no longer neglect the vacuum in state affairs and intensifying division of public opinion after prime ministerial candidates made a series of resignations.”

She said repeated criticism of the nominees’ personal backgrounds by the media was the main problem, not the nominees’ qualifications or capabilities.

The first nominee, Ahn Dae-hee, was criticized for making a small fortune practicing law in just a few months after retiring from the Supreme Court.

Moon, former editor in chief of the JoongAng Ilbo, was criticized for remarks he made about the Japanese colonization of Korea and the division of the Korean Peninsula being God’s trial for Koreans.

“It seems like no one [nominated as prime minister] could dare cope with the attacks against their personal lives and their families even before they could get into a confirmation hearing,” she said, “and it was realistically very difficult to find a figure who can pass the verification standards that have become so high.”

On a plan to establish a new secretarial office devoted to finding candidates for high-ranking government offices and vetting their qualifications and personal histories, which the Blue House had announced earlier, Park asked both the ruling and opposition parties to join forces to find ways to improve the confirmation system for top government offices. She obtained support for the idea from Saenuri Party floor leader Lee Wan-koo last Wednesday.

Noting that an extraordinary session of the National Assembly is under way, the president expressed her desire for lawmakers to pass the so-called Kim Young-ran bill, an anti-corruption law that would enable authorities to punish government officials for taking bribes of 1 million won ($988) or more regardless of whether they did political favors in return.

The bill is considered a litmus test of whether the country’s politicians are sincere about fighting corruption and getting to grips with the rotten parts of the way Korea is run, the president noted.

The president also signaled she would restore economic growth as a main priority in the second half of this year.

“If we fail to reignite the embers of economic recovery, we will be lost,” she said, admitting that economic growth has decelerated recently due to stagnant domestic demand. “We should proactively push ahead with reform tasks, including the three-year economic innovation plan.”