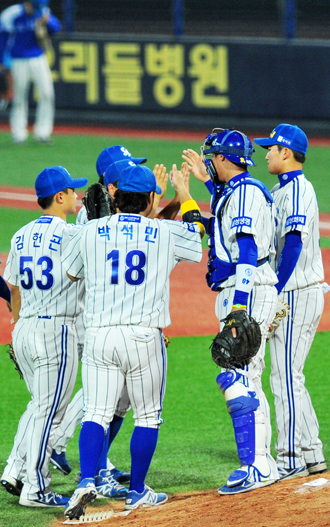 In April, the defending champion Samsung Lions were in seventh place as their starting pitchers and bullpen struggled with injuries.

But the Lions turned things around in May and June, and as the dog days of summer set in, they look like they are on their way to becoming king of the Korea Baseball Organization jungle for the fourth year in a row.

The Lions finished June with a record of 44-21-2 (.677 winning percentage) and were leading the second-place NC Dinos by six games as of Monday.

“In baseball, it’s very hard to gain three games in a month,” says Dinos Manager Kim Kyung-moon. “It looks like only three spots are left for the playoffs in September.”

Another reason the Lions are in the driver’s seat is the tight race among the other playoff contenders - 6.5 games separate the Dinos from the fifth-place Doosan Bears.

That has resulted in a fierce battle among the Dinos, Nexen Heroes, Lotte Giants and Bears to secure playoff spots. At the same time, the Lions went on winning streaks of 11 and seven games in the past two months.

Before the season started, the Lions had some concerns with the loss of closer Oh Seung-hwan from the bullpen, which had been one of their strengths, and leadoff hitter Bae Yeong-seob, who is serving his compulsory two years of military service.

But with Lim Chang-yong joining the team as the new closer and Yamaico Navarro blossoming into one of the league’s premier leadoff hitters, the Lions look even stronger than during the past three years when they won the pennant race and Korean Series title.

In 2014, it looks like the Lions will continue to rock the league.

Starters Yoon Sung-hwan, Jang Won-sam and Rick VandenHurk each has already won eight games, and the fourth and fifth starters have four victories each.

Since the top pitchers in their rotation will get at least two more starts before the All-Star break, the Lions could have three 10-game winners at the season’s halfway point.

In addition, their bullpen is leading the league with a 3.78 ERA - the only team under 4.00 - and Choi Hyung-woo, Park Suk-min, Chae Tae-in and Lee Seung-yeop in the heart of the batting order have combined for 61 home runs and 208 RBIs.

In the leadoff spot, Navarro is tied for fifth in home runs with 18, and shortstop Kim Sang-soo leads the league with 31 stolen bases.

“It looks like their biggest challenge is going to be staying healthy,” says analyst Kim Jung-jun.

“Well, it’s only half of the season,” says Lions Manager Ryu Joong-il. “We have 11 more games to play before the All-Star break, and our goal is to win seven.”