“A Beauty,” by Joseon-era painter Shin Yun-bok, is now on display at Dongdaemun Design Plaza, as part of a second exhibition organized by the Kansong Art Museum, until Sept. 28. Provided by Kansong Art and Culture Foundation

Dongdaemun Design Plaza (DDP) in central Seoul is the place to visit this summer if you want to see how Joseon Dynasty (1392-1910) scholars defined beauty.

A round face with lean eyebrows and small eyes without an eyelid crease, as well as small but dark-red lips, were elements that made a woman pretty, according to Joseon painter Shin Yun-bok’s work “A Beauty.”

The piece is rarely shown by its owner, the Kansong Art Museum, which only opens to the public for two weeks in both spring and fall.

But “A Beauty” will now greet art fans in Korea for almost three months at the design plaza. 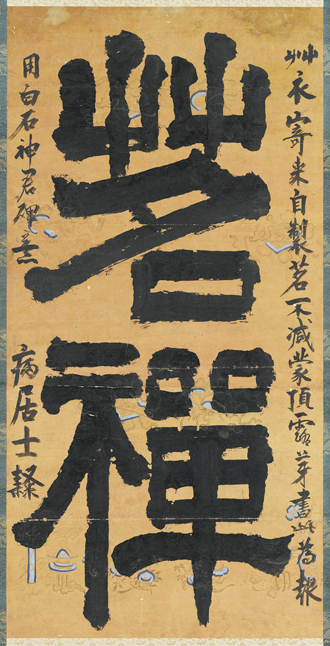 The painting is part of the second show at the DDP featuring art from Kansong, which has become one of the most important private art institutions since it was established in 1938 in Seongbuk-dong, northern Seoul.

The museum named the exhibition “Bohwagak,” which means “house of sparkling treasures.” It was also the name of the museum when it first opened.

While the first exhibit at the design plaza, which ended last month, focused on explaining how museum founder Chun Hyung-pil (1906-62) curated his collection, the second emphasizes the quality of the works. Out of 114 items on display, 12 are National Treasures.

“We want people to feel like they have read a book about Korean art history after they looked through the exhibition,” said Baik In-san, an art director at Kansong Art and Culture Foundation.

He explained that the artifacts are divided into categorical and chronological order to help visitors understand the flow of Joseon art.

Three written pieces by well-known penmen from the early, middle and end of the Joseon period, Grand Prince Anpyeong, Han Seok-bong and Kim Jeong-hui, respectively, are presented side by side for viewers to see the changing calligraphy style of the time.

A total of 12 items featured in the first exhibition, including the “Blue and White Porcelain Jar with Chrysanthemum Designs in Underglaze Iron,” a celadon from the Joseon era, will remain in the exhibition hall for its second show.

Meanwhile, the museum is gearing up for another display at its main building in Seongbuk-dong this fall, which will focus more on the academic aspect of its collection.

“If we are to do two exhibitions, we think that it is necessary to differentiate the characteristics of each show,” said Baik. “We will continue planning exhibitions for the general public [at DDP] and will try presenting more of an academic exhibition that we tried around 10 years ago.”

More details on the other exhibition will be announced later.

“Bohwagak” ends Sept. 28. The show opens each day at 10 a.m. On Tuesdays, Thursdays, Saturdays and Sundays it closes at 7 p.m., while on Wednesdays and Fridays it stays open until 9 p.m. It closes on Mondays.