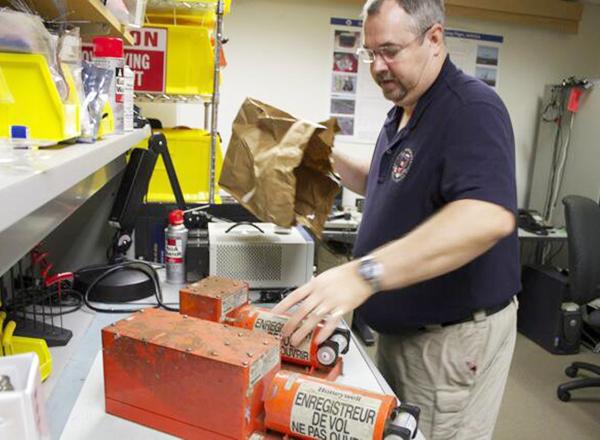 Greg Smith of the National Transportation Safety Board looks over the flight data and cockpit voice recorders from Asiana Airlines Flight 214 at the agency’s lab in Washington last July. [REUTERS/NEWS1]

I would like to share several viewpoints in regard to aviation safety for the sake of the advancement of the industry after examining the U.S. National Transportation Safety Board’s final report on its investigation of the crash of Asiana Airlines Flight 214 in San Francisco in June 2013 that killed three people and injured 187.

The NTSB last week laid the primary blame on the cockpit crew of Asiana Flight 214 for mismanaging the plane’s descent and landing, overreliance on the automation system, and failing to follow protocols and monitor the plane’s airspeed, including the automatic airspeed control.

“We respect the National Transportation Safety Board’s final report that holds the pilot and other crew members accountable for the emergency landing at a San Francisco airport,” Asiana said in a statement, adding that the airline has enhanced training of its flight crews to reinforce safety standards. But it somehow sounds as if a driver - not the automaker - is apologizing for an accident been caused by a flawed system in his car.

Unlike other accidents, various complexities and factors contribute to an aviation disaster. To accurately probe an accident, a wide range of factors must be examined - both human and environmental elements like the pilots and crew, the aircraft, control tower procedures and instructions and weather conditions. Every possible question must be asked to achieve a comprehensive and careful investigation and review.

The Korean Aviation and Railway Accident Investigation Board and Asiana have demanded the U.S. federal investigators conduct a more thorough and expansive probe into potential problems with the aircraft manufacturer’s automatic throttle - the key mechanism that controls engine power and thus speed - as well as questions about complicated automated aircraft systems, communications and other issues with the air traffic control system at San Francisco International Airport.

The international airline industry in March also criticized the U.S. federal agency for wrapping up the investigation without a thorough probing of the safety problems related to the computer and electronic systems of the aircraft.

However, the NTSB caused complaints by faulting the Asiana pilots from the first briefing after the preliminary investigation and throughout the hearing process.

As result, the board came to the conclusion that the cause of the accident was largely due to pilots, fatigued after a cross-Pacific trip from Incheon, who unintentionally deactivated the automatic airspeed control and did not notice that the airplane was too low and slow until it was too late. Meanwhile, the board mildly cited the “complexities” of the autothrottle and autopilot flight director systems, which could have contributed to the accident. The NTSB gave only a brief recommendation to the manufacturer of the aircraft to study and develop a modification to its automatic flight control systems and did not mention the San Francisco air traffic control system.

To outsiders, the results of the investigation by the NTSB fall short of being well-rounded and balanced, raising suspicions that it serves to protect the U.S. manufacturer of the aircraft and local airport authority instead of probing genuine problems that could help prevent similar accidents in the future.

The NTSB could lose its reputation and credibility as a fair safety investigator and guardian.

The primary purpose of investigating aircraft accidents lies in meticulous probing into primary, supplementary and all possible causes and factors to prevent similar mishaps from happening in the future. If the federal agency closes the case without answering questions about defects in the manufacturing process of one of the world’s most popular wide-bodied airliners and common automated piloting systems, it risks not only its own credibility, but also that of the international air travel industry and the safety of passengers. I offer my humble suggestions from sincere concerns over air safety as a person in charge of teaching and training air professionals.

*The author is a professor of the Department of Aeronautical Science and Flight Operation at Korea Aerospace University.