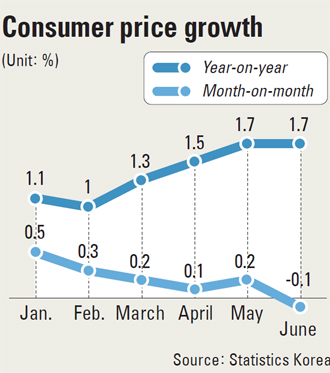 When compared to last year, the nation’s low inflation rate increased for the fourth straight month in June. Compared to May, however, it slipped, raising questions about whether the central bank will be forced to lower its benchmark interest rate, especially when economic growth could be lower than the government’s 4 percent target.

Statistics Korea reported yesterday that inflation last month grew at an annual rate of 1.7 percent. That matches May’s year-on-year figure, which was the sharpest increase since October 2012. Inflation has been growing since February.

The Finance Ministry said the year-on-year growth was largely because of the low rate reported during the same month last year.

“In June last year, the consumer price growth index was the year’s lowest as the price of agricultural and petroleum goods stabilized,” the statement read. “Although consumer prices will remain stabilized, the year-on-year growth rate will likely increase gradually as last year’s index was low.”

It added that rising international crude prices and the summer weather remain as potential risks but that it will take pre-emptive action to maintain a stable inflation growth.

Although inflation grew when compared to a year earlier, worries are mounting because consumer prices retreated 0.1 percent compared to May.

It was the first decline in eight months.

However, some project that this could be signaling a slowing of the economy.

At the central bank’s monthly monetary policy committee meeting last month, one of the members on the board was found to have projected the inflation rate to fail to reach the central bank’s target due to falling prices of goods overall because of the appreciation of the won and the absence of any momentum that would strengthen demand.

In April, the central bank revised its January outlook for inflation this year from 2.3 percent to 2.1 percent.

Although central bank Governot Lee Ju-yeol has hinted he has no intention of loosening the key interest rate, some are cautiously raising the possibility of a change in the direction of monetary policy.