Record level of first-half exports - with an asterisk

Record level of first-half exports - with an asterisk 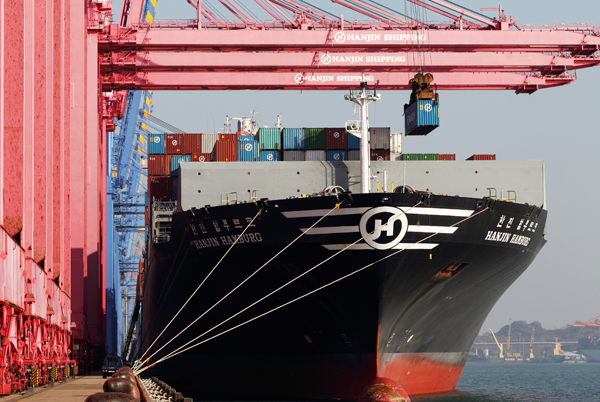 Exports during the first half of the year reached a record level, the government announced yesterday. When breaking down the figures, however, it turns out that Korean exports - one of the key drivers of the nation’s economic expansion - have actually been losing steam the past three months as the won continued to appreciate against the U.S. greenback.

And while the Ministry of Trade, Industry and Energy remains upbeat about prospects for ongoing growth with economies recovering in the United States, European Union and Asean countries, some experts see the tapering of export growth from April to June as proof that the strong won is taking a toll.

The Trade Ministry announced yesterday that first-half exports were $283.6 billion, a 2.6 percent increase from the previous year. Imports grew 2.7 percent to $263.3 billion.

A ministry statement cited brisk exports of IT goods, including computer chips, as well as expansion in the European, U.S. and Asean markets as primary reasons for the record level of exports in the first half. 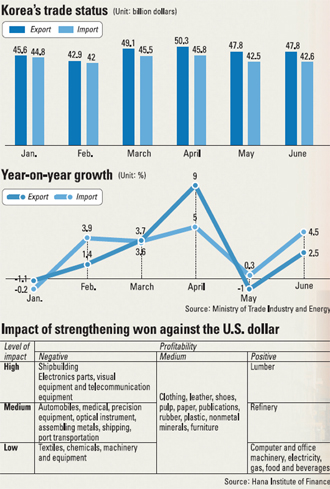 Shipments of smartphones, tablet PCs and other wireless mobile telecommunications goods grew 12.7 percent year-on-year, while semiconductor shipments were up 10.6 percent.

LCD exports dropped sharply, down 8.3 percent from the first half of last year in tandem with falling unit prices.

It said the United States in particular saw consistent growth in demand for automobiles and wireless telecommunication devices.

Nonetheless, the Trade Ministry was optimistic that the momentum will continue.

“We expect export growth to continue, centered mostly on ships and automobiles as there are outlooks that global trade is expanding thanks to the economic recovery of advanced economies, including the United States and EU,” said Won Dong-jin, director general of the ministry’s trade policy bureau.

Despite welcome news of record first-half exports, concerns are mounting over the decelerating pace of growth.

Many experts have raised concerns about the impact of the appreciating currency. Since the beginning of the year, the won has appreciated more than 4 percent against the dollar.

According to Bloomberg, analysts have started to cut profit forecasts for Korean companies by 15 percent this year. Lee Sang-hoon, chief financial officer at Samsung Electronics, last week warned the company’s second-quarter performance will likely be disappointing.

Last week, Hana Institute of Finance released a study showing that the appreciation of the won will have the biggest negative impact on shipbuilders and electronics parts manufacturers.

In contrast, the lumber industry and refiners, which are heavily dependent on imports and have large foreign debts, will appreciate a strong won.

The impact of the won on Korea’s automakers will be diminished compared to the past, since companies have increased their production overseas. “Until the 2008 global crisis, they saw their profitability drop sharply,” the report stated.

“Although the impact of the stronger won against the U.S. dollar differs by industry, overall, when the won appreciates 10 percent, the net profit rate falls 2 to 3 percentage points,” said Lee Ju-wan, a researcher at the Hana institute. “Therefore, the recent appreciation of the won will likely have a negative affect on the nation’s economy in the second half of the year.”

Although the government remains optimistic about near-term outlook for the nation’s exports, officials acknowledged yesterday that the won’s appreciation remains a lingering threat along with uncertainty surrounding China, which is the biggest consumer market for Korean goods, and the escalating conflict in Iraq.

The Trade Ministry said it will step up its monitoring of the situation.

“In the case of Asean [exports], the situation has slightly recovered, but exports to China - not only in June alone but in the first half of the year - were not that good,” said Won at the Trade Ministry. “We plan to announce measures this month to revitalize our exports after discussions with related departments, including the Finance Ministry.”

The focus is now shifting to this month’s scheduled announcement on the nation’s economic growth outlook.

The central bank earlier this year projected the economy would expand 4 percent in 2014. The question, however, is whether the figure will be revised because of the retreat in the domestic market after the Sewol tragedy and slowing exports.

HSBC yesterday announced that its purchasing manager index fell for the third consecutive month. A reading exceeding 50 indicates that companies’ orders, production level, hiring and supply will increase, whereas a reading below 50 means the opposite. The index fell below 50 in May at 49.5 and further slipped last month to 48.4.

Ronald Man, an economist at HSBC, noted the Korean manufacturing economy continues to struggle on the back of sluggish domestic demand and that second-quarter GDP growth will slow.