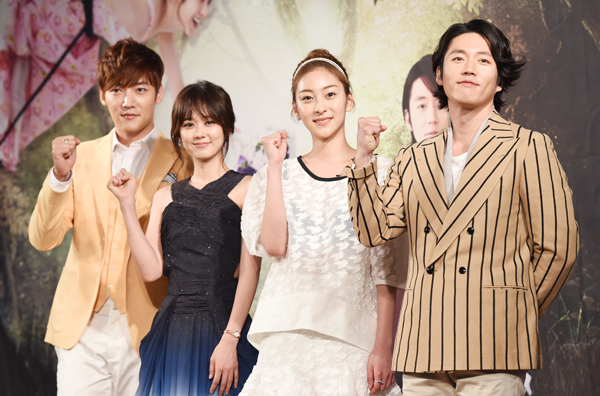 When an MBC production team unveiled a video of its upcoming drama at a press junket held in western Seoul on Wednesday, this season’s most notable Korean drama trend became clear: reunions. After Lee Joon-gi and Nam Sang-mi got back together after six years for the KBS drama “Gunman in Joseon” in late June, singer-actress Jang Na-ra returned with her old partner Jang Hyuk for the upcoming series “Fated to Love You,” an adaptation of the 2008 Taiwanese rom-com series of the same title.

“I am so happy to be back on the MBC drama, with such great people,” said Jang Na-ra to the press. The 33-year-old star worked with Jang Hyuk in the 2002 comedy drama “Successful Story of a Bright Girl,” and won incredibly high viewer ratings of 42.6 percent.

“Fated to Love You” centers on how two complete opposites end up having a baby after a one-night stand in Macau. Jang Na-ra will play Mi-young, a girl-next-door character.

“I’m trying to explore how the ‘accident’ in the foreign city helps them grow as more mature individuals,” noted producer Lee Dong-yun.