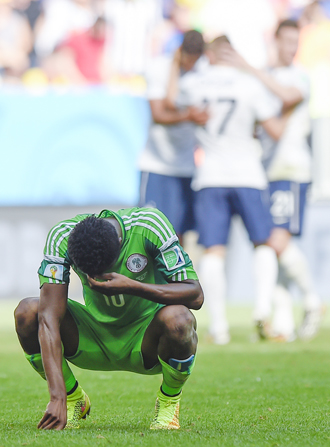 Nigeria’s Mikel Obi reacts after a Round of 16 World Cup match between France and Nigeria at Estadio Nacional in Brasilia, Brazil, on Monday. France won 2-0 and qualified for the quarter-finals. [XINHUA/NEWSIS]

The Africans had the better of the first hour in a controversial, stop-start match before France turned the tables and won with a Paul Pogba header in the 79th minute and an own goal from Joseph Yobo in stoppage time.

France will meet Germany in their quarterfinal after they finally found a way past Nigeria keeper Vincent Enyeama who had kept them at bay with some outstanding saves.

The game swung France’s way after Nigeria’s influential midfielder Ogenyi Onazi was injured and carried off following a late studs-up tackle by Blaise Matuidi, who was lucky to escape with a yellow card from U.S. referee Mark Geiger.

Matuidi raised his hands in apology for the challenge in the 55th minute, which appeared to be clumsy rather than malicious, and Onazi was carried off on a stretcher.

Geiger was also lenient in some other decisions, including failing to punish Matuidi for barging over an opponent shortly after his yellow card.

“I am not happy with the officiating,” Nigeria Coach Stephen Keshi told a news conference. “On two occasions Onazi had very bad tackles. He’s out now probably for weeks.

“This is the first time in my life I speak about the referee, but it wasn’t good. 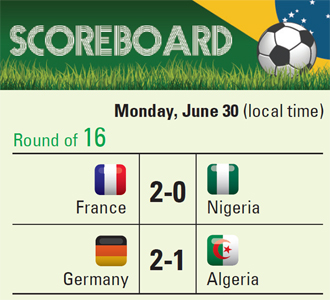 “If you look at the goal that we scored I don’t think there was any infringement,” he added. “I would love to know the reason why the referee disallowed the goal.”

France Coach Didier Deschamps, himself a combative midfielder in his playing day, admitted it had been a tough afternoon at the Brasilia national stadium.

“There was tension out there. They are a very strong side and there were a lot of duels. But we’re through,” he said in a touchline interview.

Nigeria made a bright start and thought they had gone ahead when Emmanuel Emenike turned in Ahmed Musa’s low cross at the near post with a clever flicked finish, only to see their celebrations cut short by the linesman’s flag.

Pogba, always dangerous, was denied shortly afterwards when he met Mathieu Valbuena’s low cross from the right with a flying volley, only to be brilliantly denied by Enyeama who parried the ball away with a reflex save.

John Obi Mikel was lucky to escape when he made a complete hash of his attempt to clear Patrice Evra’s pass, but the ball sailed harmlessly to Enyeama.

Nigeria should have gone ahead just before halftime when Emenike’s fierce shot was parried by France goalkeeper Hugo Lloris and Victor Moses handled as he attempted to control the rebound.

Peter Odemwingie also had a good effort blocked just after the hour, but by then France was taking control and Enyeama suddenly became much busier.

France was inches from going ahead when Karim Benzema poked the ball past Enyeama, who managed to partly block his shot and gave Moses the chance to hook the ball off the line.

Nigeria escaped again when Mikel cleared Benzema’s shot off the line before France midfielder Yohan Cabaye hit the underside of the crossbar with a thunderous long-range strike.

Enyeama then tipped Benzema’s close-range header over the bar, but he failed to deal with the resulting corner and Pogba, France’s best player, headed in at the far post with 11 minutes to play.

“To score a goal for your country, especially in an important match like this to get into the World Cup quarterfinals, it’s one of the best moments of my life,” said Pogba.

There was no way back for Nigeria and their fate was sealed when Yobo, making his 100th international appearance, deflected a low cross into his own goal in stoppage time.

Off the pitch, it was again Suarez making all the headlines - though this time for the right reasons.

In a contrite statement from his home in Uruguay, the brilliant but volatile striker said he had time to reflect on his biting of an Italian defender and apologized to the world.

“I repent deeply. I ask for the forgiveness of Giorgio Chiellini and all the football family,” he said. “I publicly promise that an incident like that will never occur again with my involvement.”

Nevertheless, Uruguay’s President Jose Mujica upped the ante over the saga, calling FIFA bosses “sons of bitches” for giving a “fascist” punishment of a four-month football ban to Suarez for the incident during Uruguay’s first round defeat of Italy.