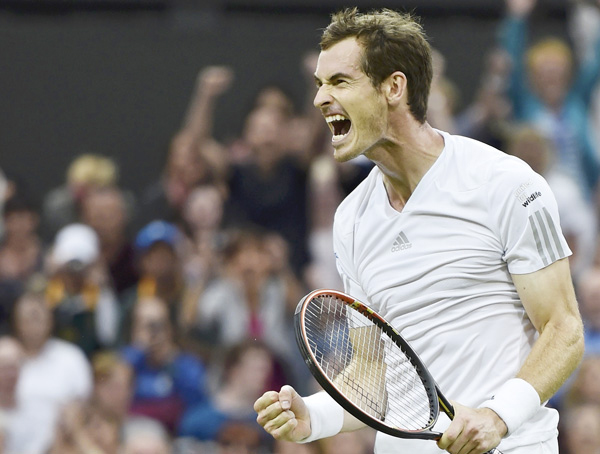 Andy Murray of Britain celebrates after defeating Kevin Anderson of South Africa in their men’s singles tennis match at the Wimbledon Tennis Championships, in London on Monday.[REUTERS/NEWS1]

As the rain wreaks havoc on the Wimbledon schedule and players start to complain, Andy Murray and Novak Djokovic have found little reason to worry about the weather.

It helped that both got to play Monday on Center Court, the only spot at the All England Club with a retractable roof.

And with back-to-back, straight-set victories, they moved closer to a semifinal showdown that would be a rematch of the final last year, when Murray beat Djokovic to become the first British man since 1936 to win Wimbledon.

He reached the quarterfinals for the seventh consecutive year by dulling the dangerous serve of 20th-seeded Kevin Anderson and saving a set point in the tiebreaker of a 6-4, 6-3, 7-6 (6) win. They played under a drizzle for about 15 minutes before the roof was closed early in the second set.

It stayed that way for the top-seeded Djokovic, and the 2011 champion beat No. 14 Jo-Wilfried Tsonga for the 11th consecutive time, 6-3, 6-4, 7-6 (5). Djokovic grimaced once in the final set while clutching the upper left arm he landed on in his prior match, but finished strongly and said afterward he felt fine.

“A lot of matches were canceled, but that’s London, that’s Wimbledon, with its very unpredictable weather,’’ Djokovic said.

Murray, who hasn’t dropped a set, said: “They should always try to play with the roof open, because it’s an outdoor event.’’

Australian Open champion Stan Wawrinka was less than pleased that his third-round match was put off from Saturday to Monday (Wimbledon tries to avoid playing on its middle Sunday). He got through it quickly, defeating 45th-ranked Denis Istomin 6-3, 6-3, 6-4 in less than one and a half hours.

Afterward, the fifth-seeded Wawrinka noted it won’t be easy to win five best-of-five-set matches in a week if he’s going to claim the title.

“For sure, I was disappointed,’’ Wawrinka said about not getting on court Saturday, when showers disrupted play for several hours. “You cannot do anything. You have to accept [it]. They do what they want, and you just follow.’’

“I understand why Wawrinka was complaining, because we have this tradition here of the middle Sunday. ... We have to rethink [that],’’ Djokovic said.

Maria Sharapova never got a chance to play at all Monday, because her fourth-rounder against No. 9 Angelique Kerber was postponed. That was rescheduled for Tuesday, and the winner must play Wednesday against No. 13 Eugenie Bouchard, the first Canadian in the Wimbledon quarterfinals in the 46-year Open era.