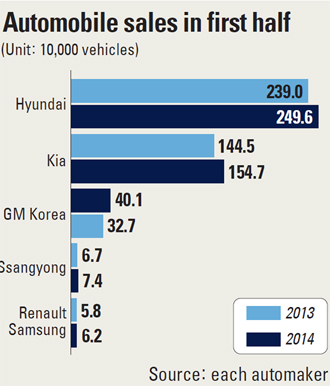 Korean automakers’ sales in the first half of the year increased 3.3 percent from a year ago.

The five local carmakers sold a total of 4.5 million vehicles from January through June, a slight improvement on last year’s 4.36 million, according to data released by the companies yesterday.

Among them, GM Korea was the only automaker to report a sales decrease during the first half. Its exports dropped 24.1 percent year-on-year following General Motors’ decision to pull the Chevrolet brand out of Europe. As a result, global sales of Korea’s third-largest automaker plunged 18.5 percent to 327,280 units in the first six months.

GM Korea’s only relief came from domestic sales. It sold 71,958 vehicles during the first half of the year, its best first half since 2004.

In contrast, Renault Samsung Motors advanced 6.9 percent year-on-year to 58,705 units in the first half, despite a 20.5 percent year-on-year drop in exports. RSM’s strong domestic sales were enough to counter losses overseas. The French automaker’s Korean unit saw its highest growth in the local market after selling 36,977 units, up 40.5 percent from a year ago.

The result also was enough to beat Ssangyong Motors and stay in fourth place in the domestic market. Ssangyong sold 33,235 units in Korea during the first six months of 2014.

In domestic sales, Kia reported a drop as it sold only 218,764 units in the first half, down 3.4 percent from a year ago. But Korea’s No. 2 automaker said the situation will change in the second half since sales of new models like the Carnival minivan will be in full swing, while the Sorento R SUV is to be introduced.

The company’s larger affiliate, Hyundai, sold 346,434 units to local consumers in the first six months, up 6.4 percent from a year ago.

“New models like Sonata and Genesis led the domestic sales,” the company said in a release. “Grandeur Diesel, which started selling from last month, will boost second-half sales.”

The five companies’ combined home turf sales were 707,368 units during the January-June period, up 5.1 percent from a year earlier.

Excluding imports, Hyundai and Kia had a combined 79 percent of the new car market in Korea in this first half.