New LTE is ideal, but not real

New LTE is ideal, but not real 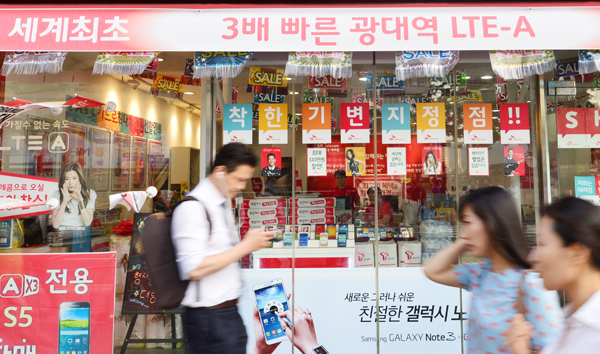 A smartphone store in Seoul on Monday has put up banners advertising phones and other devices with broadband LTE-Advanced.[NEWS1]

Competition among the top three mobile carriers to provide faster networks notched higher last week after the carriers launched a broadband LTE-Advanced service that they claim is three times faster than regular LTE.

The broadband LTE-A service from SK Telecom, KT and LG U+ technically provides a maximum download speed of 225 Mbps, according to the mobile carriers.

However, there are questions over whether users of broadband LTE-A will actually notice an increase in download speeds.

The carriers have said at press conferences that the actual speed of the network will be much slower than 225 Mbps, at about 70 to 80 Mbps, one-third of 225 Mbps. 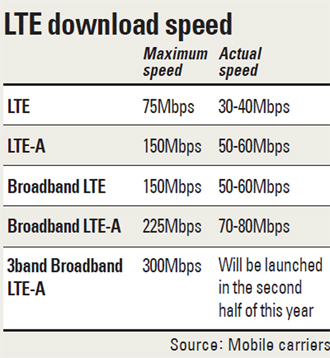 Previously, the fastest networks were LTE-A and broadband LTE, on which mobile device users could get a download speed of 50 to 60 Mbps.

Consumers have criticized the broadband LTE-A service as just another false advertisement along with the previous LTE services, which were also slower in reality than in theory.

“The mobile carriers always advertise it as if there has been a breakthrough in the download rate, but when using [the different networks], it is not easy to tell the difference. I hardly trust the ads anymore,” said a 27-year-old college student surnamed Son.

“I am quite afraid that my monthly communication cost will get higher. The carriers said they launched unlimited LTE plans recently, but I still haven’t seen a change. Instead, I often end up with higher bills than usual because I used too much LTE,” he added.

The three mobile carriers claim that on LTE-A, a user can download a feature-length movie in 35 seconds.

But that rate is only true if the network is functioning on its maximum speed of 225 Mbps. In reality, downloading the movie will take three times as long, or about one minute and 40 minutes.

“Since it will provide an average of 75 Mbps on commercial broadband LTE-A services, we understand that the wireless companies are confusing the public by using the term ‘three times faster,’ which people will not actually experience,” said a spokesman for the Ministry of Science, ICT and Future Planning.

But it isn’t the first time that the three mobile carriers have exaggerated their rates to promote their services.

When the Science Ministry inspected the average speed of LTE-A, which SK Telecom and KT launched last year, they did not record even half of the speed that was being advertised.

The average download speed was 56.5 Mbps, which is slower than the maximum speed for regular LTE, at 75 Mbps.

There are also criticisms that users will not be able to tell the difference between the new broadband LTE-A service and other LTE services.

When watching a full HD video, for instance, there is not much difference between older LTE-A networks and broadband LTE-A.

“Also, for Internet searches, smartphones’ processors, RAM, cookies and data affect the download rate and make it less likely that users will notice the LTE-A,” said a spokesman for the Consumers Union of Korea.

And unlike the download speed, the LTE-A broadband upload speed is about the same as other LTE networks, so it will not additionally benefit customers.

“Unless consumers use services with a lot of traffic and play large-capacity games and high-definition videos, they might not be able to tell the difference in speed,” said a retailer at SK Telecom.

Experts say that consumers should check their usage before signing up for broadband LTE-A services because many older devices will not support it.

Even the new smartphones such as the G3 and Galaxy S5 cannot carry the broadband LTE-A network due to chipset compatibility issues. To use the network, a customer must purchase a Galaxy S5 Broadband LTE-A, which is the only model at the moment that can run on the network.

“Faster communication speed means that the consumption could also speed up. Consumers must be aware of rising monthly bills,” said the union spokesman. “Mobile carriers are also not informing consumers that they must purchase a new device that supports LTE-A.

“Consumers are not requesting that mobile carriers compete over download speed anymore, but rather their demands are more about ways to cut communications costs while using their current services.”