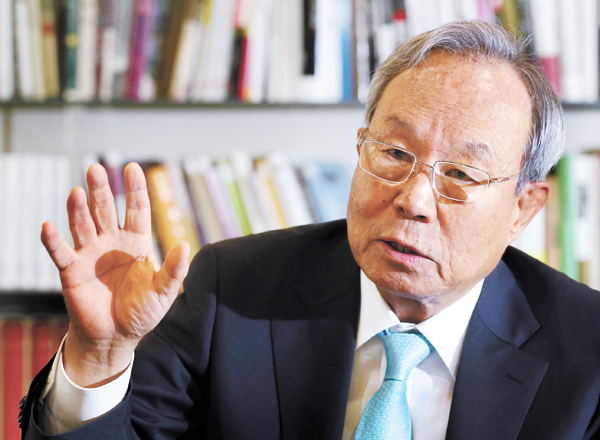 Except for the two years he served as President Kim Young-sam’s chief of staff from 1993 to 1994, he has spent most of his 36-year political career in the National Assembly. Even the book he published in early June is titled “I Want to be Remembered as a National Assemblyman Forever.”

He was the first National Assembly speaker who was not appointed by the president, as well as the only speaker to have impeached a president (Roh Moo-hyun).

Since retiring 10 years ago, Park has taught at universities and runs a laboratory covering Korea’s unification and politics.

The JoongAng Ilbo recently sat down with the seasoned government veteran to inquire how he feels about the current state of government affairs.

Q. Two prime minister candidates bowed out one right after another. What do you think is the fundamental reason for this?

A. If they keep verifying candidates like this, the same thing will happen again and again. I see it as a phenomenon in the process of society becoming more transparent. Since the nation was founded in political chaos and war, we have lived in an ideologically confined land, and the rapid growth over the last couple of decades made our lives misguided. How many would have survived it long enough to meet the strict standards of advanced countries? Rather than focusing on [the nominees’ pasts], we should look into how well they could handle their tasks.

Do you mean that the skeleton-seeking verification process is the problem?

Having served as the presidential chief of staff, I have experienced many kinds in the personnel pool, but it is not easy to find someone who has qualities and who can pass the conformation hearing easily. I heard that the Park administration is having a hard time choosing a person because more people are refusing to be nominated.

Isn’t President Park Geun-hye looking for people in too small of a pool to hire someone close to her?

When choosing nominees, President Park begins with figuring out whether the person is trustworthy and is not going to betray her. Her father, Park Chung Hee, was shot by one of his closest aides. Even the people who supported her when she was acting as first lady [after her mother was killed] turned their backs on her after her father died. She could not even hold a memorial ceremony for her father. She has the resentment of a woman who has lived alone, and that is why she is keeping tabs on her people. She tends to turn to someone she knows. It may not be right to say that great employment is to hire people from various backgrounds, including those you don’t know.

Even though Moon Chang-keuk couldn’t make it, wasn’t he an unexpected nominee in that sense?

I liked it because I could see that the president worked hard to find him.

But Moon couldn’t even go on to the confirmation hearing. It was like a witch hunt, and he was stigmatized as pro-Japanese and anti-nationalist. Do you think it is normal to do that in a democratic country that proclaims to uphold human rights and constitutionalism?

I regret that the government ended up accepting false insistences from some media outlets, the main opposition party and some ruling party politicians. Moon should have had the chance to explain himself and his writings.

Should anyone take responsibility?

Critics say that the Park administration has a “dictation cabinet.”

President Park admires her father, not just as a father but also as the president. She believes her father was a successful president that made today’s Korea. The president watched how her father ruled the nation, so it seems very similar. However, social conditions today are much more different than those of her father’s time. It is a digital era today, but it was analogue back in the days when his commanding leadership could work on the basis of a military administration. Ministers only needed to write down what the leader said. But it is different now. Society has become more professional, diverse and divergent. No one can manage the entire government on his or her own now. Commanding leadership worked decades ago, but now we need leadership that discusses. It is not right to see the prime minister and other ministers sit down and write down what the president says. It is anachronism.

You are a standing adviser for the ruling Saenuri Party. Have you met President Park in person?

I met her once. It was not a one-on-one meeting, but at a gathering.

As a former politician, did you give her any direct advice?

We talked about her communication problem among the parties. I told her to exercise her leadership in tune with the times and that she should become a president who listens to multiple opinions. She has very strong convictions about her principles. She is a perfectionist and sticks to her principles. She is unperturbed in her behavior, which makes it hard for people to approach her or give her honest advice. Giving honest advice doesn’t mean pointing out her mistakes, but persuading someone quietly. I guess she doesn’t have much of a chance. She should not eat alone just because she lives alone. If it is hard to talk to someone one-on-one, she should gather people instead. Being president means listening to a lot of opinions, choosing one of them and making decisions based on select views. Someone needs to explain how the president should behave.

So the so-called seven-man group, who are known as President Park’s advisers, is not doing its job?

It is just a term coined by the media. They actually do nothing [when it comes to Park’s decision-making]. But there are some people who she turns to.

Are you saying there is a “doorknob three” [an expression for those who are close to authority and take advantage of it]?

I cannot tell you the details, but she is talking to her advisers through a secret channel. Former presidents also discussed issues with close aids, not with ministers, the chief presidential secretary or others. Unofficial decision-making can be very dangerous.

Do the “seven-man” group members worry about the president?

They are all my acquaintances and they call me every two days because they are worried about her.

Isn’t the presidential chief of staff supposed to give honest advice?

It wouldn’t be easy because it depends on the characteristics of the president, given that she lives alone and she has strong convictions about her principles.

Should her secret channel do the work instead?

Advice in such a secret channel is advice on the condition that they support the will of the president.