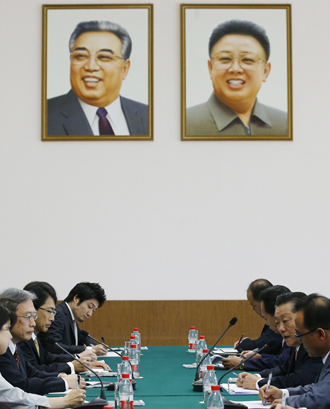 Junichi Ihara, second from left, the director-general of Japanese Foreign Ministry’s Asian and Oceanian Affairs Bureau, and Song Il-ho, second from right, the head of North Korean delegates attend talks yesterday at the Embassy of North Korea in Beijing. [REUTERS/NEWS1]

BEIJING - Japanese and North Korean envoys began talks Tuesday about the North’s abduction of Japanese citizens after Tokyo expressed dismay at its firing of Scud missiles.

The meeting was aimed at clarifying the fate of missing Japanese, an issue that has kept relations in a deep freeze. The talks went ahead despite concern the North’s launch of missiles on Sunday, which South Korea viewed as provocative, might prompt Tokyo to pull out.

The launch “is greatly regrettable” and runs counter to the spirit of previous joint statements, said Japan’s chief envoy, Junichi Ihara. His North Korean counterpart, Song Il Ho, said the launches were “fully consistent with maintaining the peace and stability in the region.”

North Korea abducted dozens, and possibly hundreds of Japanese in the 1970s and ’80s. The North agreed to open an investigation into the abductions following three days of talks in May in Stockholm.

Pyongyang acknowledged in 2002 that its agents had abducted Japanese to train its spies and eventually returned five of them, along with their families. It said others Japan claimed were abducted had died or never entered the North.

Tokyo has disputed that and wants an investigation into at least 12 abduction cases. Private organizations say many more citizens were abducted. The dispute - along with concerns over North Korea’s nuclear weapons - has brought relations to a virtual standstill.

In Stockholm, Pyongyang agreed to set up a new committee to look into the matter and Tokyo vowed to lift some sanctions if the committee appeared to have a full mandate to properly investigate the matter.

In addition to sanctions based on a set of five UN resolutions since 2006 - including an arms-trade ban, a freeze of North Korean assets, a ban on people-to-people exchanges and restrictions on education and training - Japan has imposed sanctions of its own. Japan bans port calls by any North Korean-flagged vessels, all trade with North Korea and the entry into Japan of North Korean citizens.

Tokyo says that if its concerns are satisfied, it will end three kinds of sanctions - allowing more exchanges, easing requirements to report money transfers to the North and raising the limits on cash that can be carried into the North. It will allow North Korean ships to make port calls for humanitarian purposes.

Japan previously agreed to lift sanctions on people-to-people exchanges and chartered flights in 2008, when North Korea agreed to open a re-investigation into the remaining Japanese abductees. But Tokyo accused Pyongyang of not abiding by that agreement and has kept the sanctions in place.

Past failures have left Japan cautious about Pyongyang’s promises. Tokyo had said it wanted to study the progress and details of the investigation before announcing the end to any sanctions this time.

Japanese officials had also given mixed signals about the Mangyongbong-92, a ferry that served as the main link between the countries for ethnic Koreans until 2006.

Ethnic Koreans in Japan demanded the ferry be allowed to operate for humanitarian purposes because it has allowed them to travel to the North to meet relatives or conduct annual school excursions and cultural exchanges.