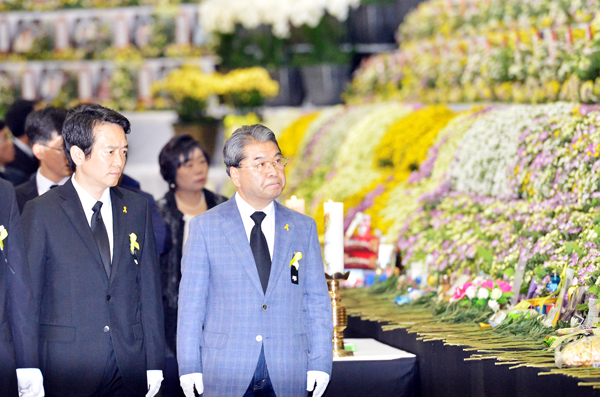 Many of the country’s new mayors, provincial governors and superintendents elected in the June 4 polls started their first day in office yesterday in a low-key manner. Some opted to forego an inauguration ceremony, while others visited local communities or the underprivileged.

For Gyeonggi Governor Nam Kyung-pil, the focus of the first day of his term was public safety. Without holding an inauguration ceremony, he headed to the joint mourning altar set up in memory of the victims of the April 16 Sewol ferry disaster.

The accident claimed the lives of nearly 300 of the ship’s passengers, most of whom were 11th-grade students on a class trip to Jeju Island. The shrine stands in Ansan city, near Danwon High School, where the victims studied.

“I will increase the number of fire fighters by 4,000 and entrust all authority to direct rescue services to the head of Gyeonggi Fire Services,” he told the officials there.

In Seoul, re-elected Mayor Park Won-soon held a ceremony in front of City Hall without making use of capital funds. The music, facilities and displays at his inauguration were all set up by volunteers, otherwise called “talent donators.”

At his previous induction in 2011, Mayor Park held an “online ceremony,” in which he broadcast speeches live to Seoul citizens.

“Again, people are hope, and the citizens are the mayor,” Park said yesterday in his inauguration speech. “Seoul should be ‘the people’s metropolitan city,’ where the public is the top priority with safety, hope and dreams.”

Similarly, Cho Hee-yeon, Seoul’s new education superintendent, referred to his induction as a “visiting inauguration.” Sans an official event, Cho visited a local elementary school to meet with teachers as well as parents and children from multi-ethnic families to discuss any concerns and how they were adjusting to school life.

He also addressed the strife surrounding the Korean Teachers and Education Workers’ Union (KTU) and told the press he would “make efforts to revise the current law with other superintendents” to recognize the nation’s largest liberal union as a legal labor group.

In the southern port city of Busan, which has been ailing from a sluggish economy over the past decade, newly elected Mayor Suh Byung-soo postponed his inauguration ceremony until the evening to visit several places related to job creation and commerce, including the Busanjin Market, Hanjin Heavy Industries’ shipyard and the Yeongdo Bridge.

After holding a brief ceremony devoid of any high-profile guests, the mayor continued on with his schedule, visiting old bookstores and local markets in the city.

In North Gyeongsang, Governor Kim Kwan-yong’s focus was on Korea’s territorial claim on the disputed Dokdo Islets, which are managed by the provincial government.

He visited the easternmost islets via ferry yesterday with about 70 locals interested in the issue. A master in Taekwondo, the traditional Korean martial art, he demonstrated his competence alongside a group of children.

Other local chiefs, however, emphasized communication with their constituency. In Daegu, Mayor Kwon Young-jin held a concert at an outdoor hall to entice public participation. After a short 10-minute speech, Kwon took questions from residents for 35 minutes. Together with about 100 civil servants, he bowed deeply in the traditional Korean manner in front of the crowd.