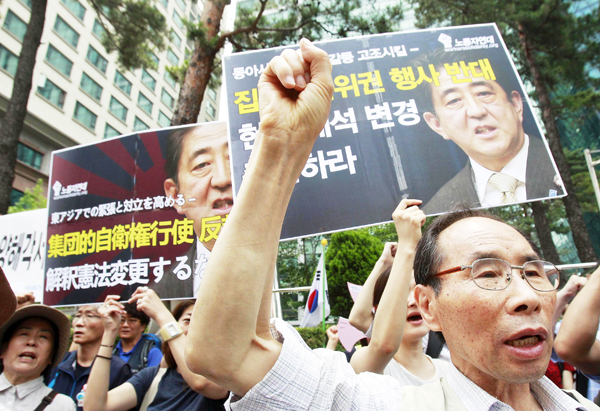 Protesters shout during a rally against an expected decision by Japan to allow its military a larger role in front of the Japanese Embassy in Seoul yesterday. The protesters demanded the Japanese Cabinet scrap a plan to allow the military to help defend other nations by reinterpreting its Constitution. [AP/NEWSIS]

Prime Minister Shinzo Abe’s Cabinet yesterday approved a new, flexible interpretation of its decades-old pacifist Constitution to enable Japan to exercise the right of so-called collective self-defense, a move that Asian neighbors have been watching with suspicion.

If Japan lifts its self-imposed ban on the right to collective self-defense, it will be able to come to the military aid of an attacked ally. But the idea has been met with controversy both domestically and internationally as it overturns a decades-long precedent set by previous administrations after World War II.

Critics include Japan’s victims of colonial rule such as Korea, which is concerned about rising militarism in Japan paired with the whitewashing of wartime aggressions and other misdeeds by the Abe government.

Article 9 of Japan’s postwar Constitution stipulates, “The Japanese people forever renounce war as a sovereign right of the nation and the threat or use of force as means of settling international disputes ...” and that the “right of belligerency of the state will not be recognized.”

The resolution approved by Abe’s Cabinet listed three main areas to expand Japan’s deployment of its self-defense forces: for cooperation with international forces such as the UN peacekeeping operations, response to gray-zone areas or low-intensity situations that stop short of military attacks, and a limited exercising of collective self-defense.

It listed eight examples where collective self-defense could be exercised, such as to intercept a missile heading toward the United States that crosses Japanese airspace, to rescue overseas compatriots or to protect allied vessels in Japanese waters in case of an attack. None of the examples would directly infringe upon Korean sovereignty, according to a foreign affairs official in Seoul.

The Japanese Diet will have to approve the changes in a majority vote in the fall. Abe’s coalition has the support of the majority in the Diet.

Abe said in a press conference yesterday evening, “Through the decision of the Cabinet, there will be even less worries that Japan will be swept up in war.”

He added, “Japan definitely won’t be a country that will go to war again,” and said that a legal team will be formed right away to enable the enforcement of the Cabinet decision.

During his first term as prime minister in 2006 and 2007, the hawkish Abe initially advocated a constitutional amendment - a complicated and politically delicate process - to enable Japan to regain the right to collective self-defense without much success.

In May, a government-appointed advisory panel of security experts called for a flexible interpretation of the Constitution’s Article 9.

Last Friday, the Japanese government submitted the final version of a resolution on exercising collective self-defense rights to the ruling coalition.

The Korean Foreign Ministry spokesman yesterday said in a statement after the announcement that the Korean government “is watching closely the Japanese government reinterpretation of the Constitution to enable exercising of limited collective self-defense rights and views it as a weighty change in its defense and security policy.” Seoul reminded Tokyo to keep in mind the essence of the pacifist Constitution that it has kept for the past 60 years.

Foreign Ministry spokesman Noh Kwang-il told reporters yesterday ahead of Abe’s announcement, “Our government’s position on Japan exercising rights to collective self-defense is that matters related to the security of the Korean Peninsula and our national sovereignty cannot be approved of before a request from us or our consent.”

More than 50 civilian organizations including the Korean Confederation of Trade Unions, Solidarity for Peace and Reunification of Korea and the Korea Alliance for Progressive Movement held a rally in front of the Japanese Embassy in Jongno District, central Seoul, yesterday, in protest of the Abe administration’s move.

Representatives of the civic groups also held a press conference ahead of the Japanese government’s announcement and said in a joint statement, “We oppose a change in the interpretation of the Constitution, which will fundamentally disable Japan’s peace Constitution, and strongly condemn Abe’s government and the ruling coalition parties for pushing a deceptive method such as a Cabinet decision.”

“This is a problem that is directly threatening to the fate of our peninsula as we try to move toward peace and unification,” said Oh Mi-jung, secretary general of Solidarity for Peace and Reunification of Korea. “We are resolutely against the Abe government’s decision to choose the path of war and aggression.”

This move is the greatest shift in Japan’s defense policy since the end of World War II.

Because the Abe administration has shown a regressive attitude toward owning up to its crimes during colonial rule, such as the Imperial Army’s sexual enslavement of girls and young women, Japan’s rising militarism raises alarms for neighboring Asian countries.

Tokyo has especially emphasized its eagerness to contribute more freely to UN-led peacekeeping operations and said its right to collective self-defense is necessary because of the regional security environment - namely threats from North Korea and China - and claimed that this will enable Japanese troops to come to U.S. assistance.