Monsoon is taking its time this year

Monsoon is taking its time this year 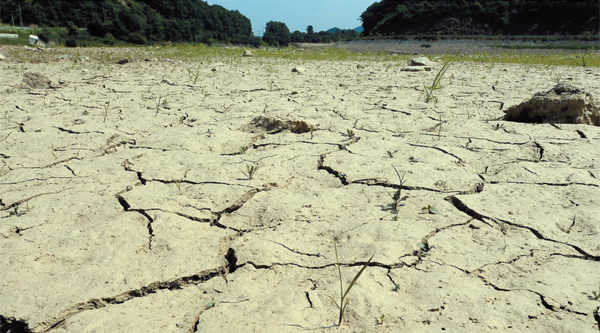 A reservoir bed in Gongju, North Chungcheong, is cracked yesterday because of a drought that was caused by the belated monsoon season across the nation, except on Jeju Island. [NEWS1]

This year’s monsoon will arrive late for most parts of Korea and seasonal rains are not expected until mid-July. But southern regions will enter the rainy season starting today.

The monsoon front usually approaches the Korean Peninsula from the south in late June, spreading gradually to the north. By early July, the entire country is usually feeling its effects. The monsoon period usually lasts 30 to 40 days in June and July and accounts for more than 50 percent of annual precipitation in many parts of the country.

But the Korea Meteorological Administration says things are different this year, especially for the central regions. Residents in those regions won’t feel the monsoon until July 12, it said. If the forecast comes true, it will be the latest since record keeping began in 1961.

A meteorologist at the weather agency blamed the El Nino phenomenon for the delay. “An El Nino happens when the Pacific Ocean waters near the equator remain warmer than normal for several months, and that’s what we have gone through this year,” the meteorologist said.

Seoul will also experience a delayed monsoon beginning around July 11, the meteorological agency said. Until the rainy season arrives, the capital will endure high temperatures of 30 degrees Celsius (86 degrees Fahrenheit).

“Around this time, we usually see the weather cool down a bit because of the monsoon,” the meteorologist said. “But this year, the hot weather will continue until mid-July.”

But southern areas including South Gyeongsang will feel the monsoon begin from today. “The rains that will fall today will last until tomorrow and then it’s forecast to pour over the weekend,” the meteorologist said.

Strangely, Jeju Island experienced an earlier-than-usual rainy season, which began in mid-June. It lingered over Jeju longer than usual.