Economics and the crisis of power

Economics and the crisis of power 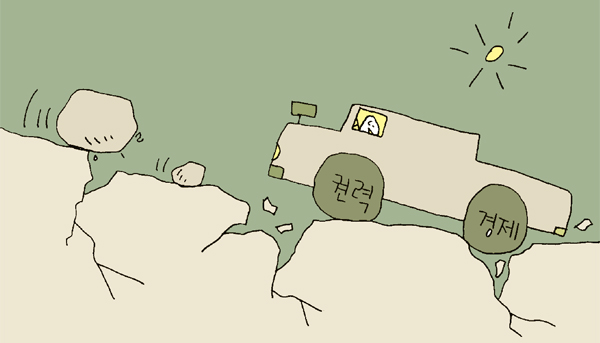 This year has been one long streak of bad luck for President Park Geun-hye. Efforts to restore her reputation through a sweeping cabinet reshuffle to make amends for the poor handling of the Sewol ferry crisis flopped disastrously, dealing a huge blow to her standing. Even her own party has turned its back with her approval rating diving to about 40 percent. She had to let go of her second nominee for prime minister and, short of options, reinstated Prime Minister Chung Hong-won who resigned from office two months ago to take responsibility for the Sewol calamity. The subsequent fiasco raised serious questions about Park’s capacity as leader less than two and a half years into her five-year term.

A crisis of authority is a drag on policy initiatives. Without political backing and public support, no president can confidently push ahead. The opposition has gained momentum to attack and the ruling party is too busy defending its political front to spare any resources to help out the president. Park is alone and her policy initiatives could be wasted without support from the National Assembly. The bureaucratic society that is always sensitive to political mood is keeping to the sidelines. Government employees know from experience to stay low during these unpredictable times.

All of the president’s economic agenda - reform of public enterprises and deregulation to spur innovation and revitalize the economy - has been put on hold. National governance has been on a hiatus for two months with all government resources going to deal with the Sewol aftermath. The government finally has returned to business and promised to start anew with a new cabinet. But the government’s agenda took another hit and one nominated candidate after another had to be crossed out. The first half of the administration in its second year had been a complete waste. All this time, economic gloom has been getting closer. The economy now appears to have lost the impetus to sustain its earlier recovery and is sinking fast.

If the slowdown turns out to be worse than a mere extension of malaise, the repercussions could be disastrous. The economy has been slow moving for three years now and another decrease could debilitate resources and further delay a rebound. The economy would set itself on a downhill trend and become structured for a prolonged slowdown. If temporary recession is coupled with loss of growth potential, the Korean economy could forever lose momentum to recover. Any shock on the external front could spell crisis for the economy.

Ominous signs are everywhere. Industrial activity and consumption fell in April and May while investment remained in the dumps. The leading indicator that gauges economic outlook has been on the decline since January. The coincident index that measures the current economic condition also has been falling since March. The indices suggest economic data could worsen in the second half. Growth in exports has slowed and the trickle-down effect has been dwindling. No strong exports can help the economy if domestic demand is mired in a slump.

Loss of leadership and policy drive can only worsen the situation. Promises of deregulation and stimulus measures could be challenged. Disappointment could further dampen confidence. An economic crisis will deal a double whammy for governing power. Nothing can better help the government than an improved economy. A government that fails on the economic front cannot win public support regardless of achievements in other areas. A government without public support cannot sustain power. The president has been concentrating on the economy entering this year for the same reason. She announced a three-year plan to spur innovation in the economy and set specific growth and structural targets.

Deputy Prime Minister Choi Kyung-hwan, in charge of the economy, steps into the dugout amid such dire circumstances. He may be one of the few confidants of the president. All the power bestowed upon him to give traction to a delayed economic agenda will be useless if his boss’s authority is weakened. But if he takes the bull by the horns and succeeds in restoring the economy, he also will contribute to saving his boss and her administration. The weight on his shoulders is that heavy. The rest of the administration hinges on Choi’s strategy and his economic team.

The new economic team must come up with immediate stimuli and a long-term plan to restructure and revive the growth engine. None is easy. Choi has a lot to do and cannot afford to be entangled in controversy. But his rash comment about easing mortgage loan requirements has already upset and confused the market. If he truly wants to prove to be the relief pitcher for the Park Geun-hye administration, he must be both a strategist with farsightedness and an activist with hindsight.