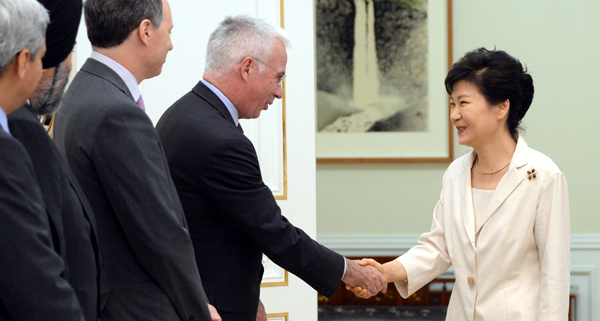 Standard Chartered CEO Peter Sands once again confirmed the London-based banking group’s commitment to the Korean financial market yesterday in a meeting with President Park Geun-hye at the Blue House.

According to a statement released by the presidential office, Sands told President Park that Standard Chartered has a strong desire to continuously expand its business in the Korean market as the largest foreign investment institute here.

He also adamantly denied recent local reports that Standard Chartered was preparing to withdraw from the Korean market, reaffirming that the group has no plans to bow out. Standard Chartered has stationed its regional headquarters for North Asia in Korea, he told the president, which will focus on strategy for Korea and neighboring markets.

This is not the first time the U.K.-based lender has been accused of prepping for a departure. The group faced persistent inquiries from the local media following a reduction in the number of its branches here since the 2008 global financial crisis.

The issue was raised once again last year after Standard Chartered suffered its worst profit performance in a decade, which was largely caused by struggling operations in emerging markets, namely Korea.

Standard Chartered’s net profit last year fell more than 16 percent from the previous year to slightly below $4 billion. The Korean operation last year saw its profit down $350 million to an overall loss of $12 million from weak consumer banking revenues.

“A much more negative sentiment toward emerging markets affected valuations and transaction flows in wholesale banking,” Sands said in a statement in March, when its 2013 performance results were released. “We also had to take a goodwill impairment on our business in Korea, given the severity of the challenges facing us and the industry.”

“The latest divestments are a meaningful signal of the continued restructuring at SC Korea, while it is important to note that they represent only a small part of the broader strategic objectives,” Fitch said in a statement released on June 23. “Any direct profitability benefits are likely to be small. Furthermore, the retail business still accounts for roughly 40 percent of SC’s Korean assets, indicating that the process of restructuring primarily toward SMEs with international business still has much further to go.”

During the meeting at the Blue House, the Standard Chartered CEO explained London’s aim to become Europe’s main offshore hub in trading in Chinese currency, while promising support in boosting the use of Korean won and Chinese yuan as trade settlements in cross-border exchanges.