Won appreciates to a six-year high

Won appreciates to a six-year high 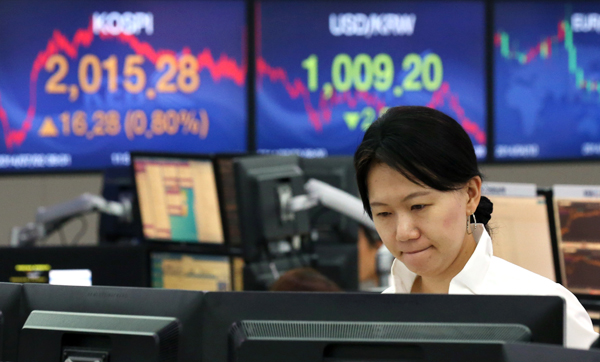 A trader looks at a monitor at the Korea Exchange Bank headquarters in Myeong-dong, central Seoul, yesterday, as the won strengthens against the U.S. dollar. The local currency appreciated against the greenback to close at 1,009.2. [NEWS1]

Amid growing concerns that the Korean economy is losing steam, the local currency yesterday reached its strongest level in almost six years.

The previous record was on July 29, 2008, when the won-dollar rate was 1,008.9. Yesterday was the fifth consecutive trading day that the won strengthened despite the government’s reported intervention to keep it above the 1,010 won-to-the-dollar level.

Many analysts project that the won will continue to appreciate, which will have a negative impact on the profits of Korea’s exporters.

“The current account surplus is expected to expand and foreign capital will flow into the country,” said Jeon Seung-ji, an analyst at Samsung Futures. “The pressure of the strengthening won will continue for a while. And we cannot rule out the possibility that the currency will go below 1,000.”

Since the beginning of the year, the won has appreciated more than 4 percent against the greenback. Analysts note that a weakened dollar, due to the U.S. Federal Reserve maintaining its low-interest policy for a while, is putting pressure on the won to appreciate. Also, economic figures from China have shown improvement lately and foreign capital from advanced countries is flowing in to emerging economies and Korea as well.

The focus is now on whether the Bank of Korea will lower the benchmark interest rate. Although there were signs of economic recovery, there have been lingering risks, including the currency and sluggish domestic spending after April’s Sewol ferry accident.