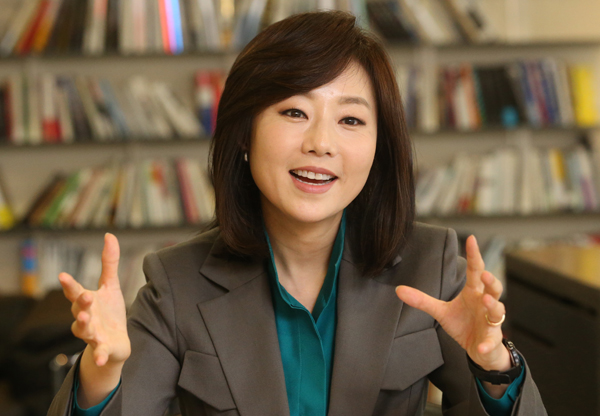 It’s been nearly three weeks since Cho Yoon-sun, the former gender equality and family minister, was appointed presidential senior secretary for political affairs, though her sophistication and good nature seem to have already made an impression at the Blue House.

When President Park Geun-hye presided over her biweekly meeting with her senior secretaries on Monday, which was held for the first time since June 12 - when Cho and three other secretaries were named - Cho made a joke near the end of the session that had everyone in the room in fits of giggles.

“I had my initial rehearsal with presidential Chief of Staff Kim Ki-choon before the session [with the president],” she quipped in the meeting with the president, “but I guess I didn’t perform as well this time.”

The 48-year-old is the youngest among the 10 secretaries and the first female to assume her post.

According to Blue House officials, Cho’s humor was an attempt to soften the otherwise rigid atmosphere of the meeting headed by Kim.

“Ever since she started working at the Blue House, Cho seems to be making a lot of efforts to create a pleasant mood for her co-workers,” said one official. “Work-wise, not only the quantity but also the quality of information in the political affairs field has improved.”

Immediately after taking over her new position, Cho proposed that all presidential secretary offices share information and press reports more actively - a measure that has so far been credited with increasing work efficiency.

Her flexible style has inevitably been compared to that of her predecessor Park Joon-woo. The former ambassador to the European Union was battered by lawmakers and the media for his seeming unwillingness to communicate, despite the fact that the political affairs senior secretary is meant to act as a liaison between the president and parliamentarians.

Still, Park was insistent that holding infrequent meetings and maintaining his distance from lawmakers was what the president had commissioned him to do.

By contrast, Cho, who worked as a lawyer and a banker before becoming a politician, has displayed an open-mindedness since the start of her term. In a meeting with a few Blue House correspondents shortly after she was named, the soft-spoken secretary said her primary role now was to deliver as many different unfiltered opinions as possible to the president so that she could make the right decisions.

After her appointment, Cho also meet with Park Young-sun, the floor leader of the main opposition New Politics Alliance for Democracy (NPAD), to seek an alternative voice.

She declared that she was very much inspired by the conversation, despite their opposing political ideologies, adding that Park, a former news anchor, had been her role model as a teenager.

When reporters asked how she intends to perform her new role, Cho responded: “It’s not like I will come up with an option one, option two, option three, in the face of the president,” she said. “I just give her as much information as possible as an assistant. The final decision is up to her.”

She also stressed the importance of never missing the details, a lesson she said she learned while she was a junior lawyer in charge of gathering information for trial at Kim & Chang, the nation’s top law firm.

But despite her role as an information-gatherer and communicator for the president, her position as a senior secretary is, in a sense, a demotion from her past position as the gender equality and family minster.

Cho, however, doesn’t seem to mind the difference in distinction, though some critics have interpreted her appointment -a politician with an amiable personality - as an attempt by President Park to mend the deteriorated relationship between the Blue House and the National Assembly, and to strengthen the management of state affairs.

Past senior presidential secretaries for political affairs have explicitly stated that Cho will need to become more proactive in playing matchmaker between lawmakers and the president.

Lee Won-jong, who held the same role under President Kim Young-sam during the 1990s, echoed that sentiment. “The president will only fail without the cooperation of both the ruling and opposition parties - no matter how good her policies or intentions are,” he said. “Cho will need to consider how she can utilize the political parties to promote the president’s achievements.”

Cho Yoon-sun was born in Seoul and earned a degree in political science from Seoul National University. After passing the bar exam, she worked as a lawyer at Kim & Chang for 10 years from 1992. In 2002, Cho briefly served as a joint spokeswoman for the Grand National Party’s presidential election preparation committee. The GNP was the predecessor to the ruling Saenuri Party.

She went back to Kim & Chang in 2003 until joining Citibank Korea as its vice president in 2007. After serving once again as a spokeswoman for the GNP, she became a proportional representative for the party in 2008 and was appointed minister of gender equality in March 2013.