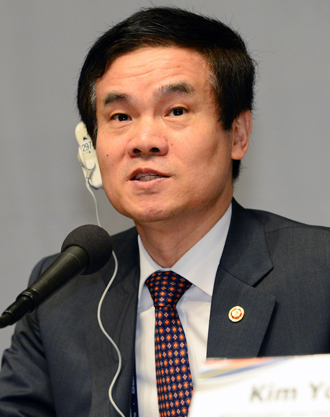 An international conference of ombudsman institutions was held yesterday at the Korea Press Center, in central Seoul, gathering public advocacy chiefs from 12 countries, including Canada, Thailand and Austria.

The 2014 Ombudsman Global Conference was hosted by the Anti-Corruption and Civil Rights Commission (ACRC), a state-run anti-graft body. The Ombudsman of Korea was integrated into the ACRC in 2008.

Modern use of the term “ombudsman,” or a public representative, was first established in Sweden with the implementation of the Swedish Ombudsman Office in 1809.

These officials are commonly tasked with investigating and addressing maladministration and handling public complaints.

The Ombudsman of Korea was first established in 1994 as a body responsible for overseeing and dealing with national concerns and violations. This year marks its 20th anniversary.

“It has been 20 years since an ombudsman was established in Korea,” said ACRC Chairman Lee Sung-bo at the opening ceremony. “In the last 20 years, we have made great strides, and the number of public complaints has steadily increased.”

Kim Young-ran, the former ACRC chairwoman, was also in attendance.

In May, the National Assembly failed to approve a bill Kim had proposed just 15 months earlier that would have cracked down on bribery among civil servants and government officials. Calls for the bill’s passage were heightened in the wake of the Sewol ferry accident, which left nearly 300 people dead and shone a light on the problems plaguing Korea’s bureaucracy.

If passed, the law would have enabled authorities to punish government officials caught receiving bribes worth 1 million won ($984) or more, regardless of the circumstances.

“At first, many people had no idea what they could demand, but as time progressed, people became more aware of their role as a citizen and as a member of society,” Kim said in a speech during the meeting. “So, if they are mistreated by government officials they will speak out and seek out an ombudsman if the situation does not change.”

Chung Ui-hwa, the speaker of the National Assembly, also presented a speech on how legal branches and ombudsman can cooperate.

At the conference, 25 speakers touched upon advocacy cases in their native countries, including Diane Welborn, the vice president of the International Ombudsman Institute (IOI) and the executive director of the Ohio-based Dayton Ombudsman, who spoke on “Enhancing Trust between Ombudsman and Citizens.”

On Tuesday, the ACRC hosted the 16th meeting of the Board of Directors of the Asian Ombudsman Association (AOA) at the Korea Press Center, where officials moved to approve the Gangwon Ombudsman’s membership application. The session was attended by 60 people from 12 countries.