KFA decides Hong will hang around

KFA decides Hong will hang around 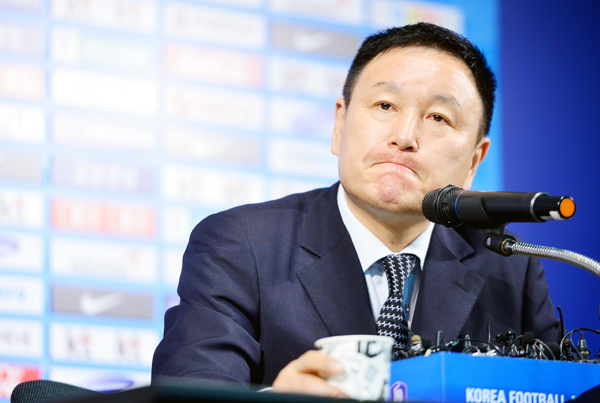 Huh Jung-moo, vice president of the Korea Football Association, listens to questions at a press conference regarding Coach Hong Myung-bo held yesterday at the KFA Hall in Seoul. [NEWSIS]

Korean national football team Coach Hong Myung-bo, who has been severely criticized for the team’s poor performance at the 2014 Brazil World Cup, will continue to lead the team for the duration of his contract, which ends after the Asian Cup in January.

In a press briefing yesterday morning at the headquarters of the Korea Football Association (KFA), the group’s vice president, Huh Jung-moo, said it will not replace the beleaguered coach, who returned home this week with a disappointing record of one draw and two losses at the world’s biggest football event. It was Korea’s first winless Cup in 16 years, and led to disappointed and angry fans throwing pumpkin yeot (Korean taffy) at the players and coaching staff when they arrived at Incheon International Airport. In Korean, the phrase “eat yeot” is an offensive slur similar to “screw you.”

The biggest issue in Korean football then became whether the KFA should retain Hong after many people suggested that he should be replaced.

“Everyone in the association including myself is accountable for the failure in Brazil,” Huh said at the press conference. “But we decided that just replacing the coach isn’t the best answer for Korean football. We had followed that pattern whenever the team struggled in the past and we didn’t want to repeat it again this time. It isn’t right to ask Hong to take all the responsibility for the failures in Brazil.”

Huh said that the coach told the association that he wanted to resign after Korea’s 1-0 loss to Belgium, but the KFA, including its chief, Chung Mong-gyu, persuaded him to stay.

“Hong only had one year to prepare for the World Cup, and I think it was not enough time for him to develop a competitive team,” Huh said. “The KFA is the one that set the difficult circumstances for the coach, therefore we are the ones most accountable for everything.

“It must be hard for fans to trust the team after they see them performing badly, but I want to ask people to think of what Hong has done in the past. He was a good captain for the 2002 World Cup team and led Korea to win the first bronze medal ever in the Olympics in 2012. I think the experience Hong had in Brazil will make him lead the team much better in the future.”

But since Hong will keep his job and no one at the KFA is resigning or being replaced, the organization will be stuck in the upcoming matches with all the same people who mismanaged the team in the World Cup.

When reporters at the conference asked if anyone would take responsibility, Huh responded: “This isn’t a matter of asking someone who did right or who did wrong. All we need to do is fix the things we did wrong in Brazil and make sure that we don’t repeat the same mistakes. We are currently looking into the problems we need to work on so we can prepare well for upcoming events.”

The KFA also said they don’t have a “Plan B” if Hong struggles in January’s tournament.

“What we strongly felt after the Brazil World Cup is that we need to provide a long-term plan, including developing a stronger youth and professional league, because that will make the national team much stronger,” Huh said. “We sincerely apologize to the nation over the poor result in the Cup and promise that we will try to improve the team to the best of our abilities.”

“I agree that it isn’t right to say Hong is accountable for everything,” football analyst Shin Mun-sun said. “But the real problem is the KFA. Their technical committee, which exists to help Hong tactically with several activities including player analysis, seems like it hasn’t contributed anything to the team in the past four years.

“Looking into the match against Algeria, for instance, in which Korea lost 4-2, the team was certainly walloped by the Algerians tactically. People may ask what Hong had prepared [tactically], but he can’t do everything alone. What really needs to be changed is the KFA, not the coach.”