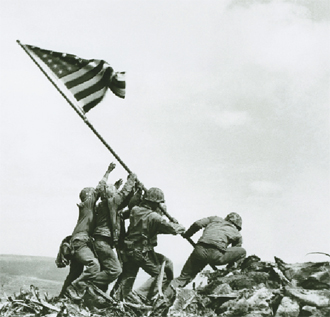 In 1945, when the late American photographer Joe Rosenthal captured the moment six servicemen raised a U.S. flag on the summit of Iwo Jima, the location of one of World War II’s most ferocious battles, the image instantly became an emblem of American patriotism.

The photo not only gained Rosenthal a Pulitzer Prize, but with its countless reproduction in campaigns, commercials and movies, the award-winning image proved that the power of photography goes beyond words.

And now, at the Hangaram Design Museum of Seoul Arts Center in Seocho-dong, southern Seoul, visitors can check out 198 Pulitzer-winning photographs that span from Milton Brook’s “The Picket Line” in 1942, which shows the violence of the Ford strike, to Tyler Hicks’ “Militants Attack Mall in Nairobi” in 2014, which depicts the extreme fear of an attack that killed at least 39 people in Kenya.

Under the title “Capture the Moment,” the Pulitzer Prize Photographs exhibition has returned to Korea with 89 more photos than the last time it was here, in 2010. Hosted by the JoongAng Ilbo, an affiliate of the Korean JoongAng Daily, along with JTBC and YTN, the exhibit’s third edition also has a series of interviews with some of the featured photographers and documentarians.

From left: Damon Winter’s “A Vision of History” (2008) depicts Barack Obama speaking during a rainstorm at a presidential campaign in Widener University, Pennsylvania. William C. Beall’s “Faith and Confidence” (1957) shows a policeman asking a child to return to the sidewalk during a parade. Provided by The New York Times and Scripps Howard News Service

One interview is with the late Kevin Carter, who won the Pulitzer in 1994 with his image of a starving toddler in Sudan being targeted by a vulture. Carter committed suicide that same year at the age of 33 due to harsh public backlash about his neglect of the girl in the picture.

The exhibition has also added a special display, “The Forgotten War,” in dedication to the 1950-53 Korean War. It displays 36 photographs by former AP photojournalist Max Desfor, taken during the final four months of 1950.

“Pictures make people feel,” said Cyma Rubin, the New York-based director of the exhibition at the opening ceremony on Monday. “Each has a life on its own. These photographs have a strange power, a force that can carry human emotions across barriers of language, time and place.”