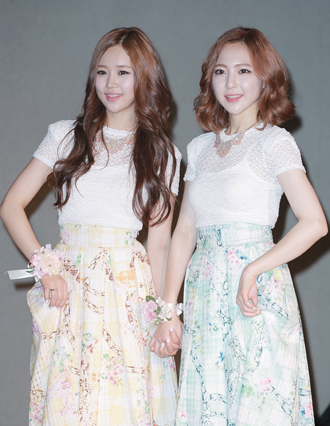 With the same hair color, dress and shoes, at first glance, the girls onstage looked like twins.

The two came off as pretty dolls, but when they grabbed their mics and started to sing, it became clear who they really were - up-and-coming female duo Wings.

At a showcase held in M Pub at the IFC Mall in Yeouido, western Seoul, on Wednesday, the two women - Kang Ye-seul, 25, and Jin Na-young, 23 - distinguished themselves with their powerful vocals, performing their second song, “Blossom.”

Wings opened the showcase with their debut song “Hair Short,” which was released in March, singing about getting a haircut to forget a recent breakup.

The performance was followed by a cover of “Wings,” the hit song by British girl group Little Mix. As the title implies, the song was not a random selection.

“Na-young and I did a guide recording of ‘Wings’ and we monitored it together,” said Kang.

“There wasn’t a plan to put us in a group back then, but after watching our performance, the producers thought it would be a good idea for us to team up.

“It became a meaningful song for us, so we decided to call ourselves Wings,” Kang added.

The women returned to the stage awhile later dressed in long floral skirts and corsages to match their newest song, “Blossom.”

Written by Wonderkid and a composer crew led by Luvan of 8Eight, “Blossom” is an upbeat track full of acoustic guitar and flute sounds that create a catchy rhythm, especially in the chorus.

G.Low of K-Much made a special appearance during the showcase to sing the rap section of the song, which was performed by Baechigi in the original recording. With a harmonious tune and a pleasant rap, “Blossom” is captivating enough to leave first-time listeners humming along.

Kang and Jin explained at the showcase how their second song differs from their first.

“If our debut song ‘Hair Short’ is about a girl going through a breakup, ‘Blossom’ is about falling in love and feeling butterflies,” said Jin.

Unlike their “Hair Short” performance, which was full of energetic dance moves, the girls used standing mics for the “Blossom” performance.

“We used a standing mic for this song to give a quieter mood rather than a dynamic atmosphere,” said Jin.

“There weren’t any difficulties in using a standing mic, but it was hard to express the hesitance and fear one feels when newly falling love.”

Kang added, “We tried to express the nervousness of falling in love through small gestures like facial expressions and hand motions.”

With their second single about to be released, the duo expressed their desire to establish themselves as a powerful group that can not only sing well but will also appeal to the masses.

When asked about their future goals, Kang and Jin said they want to come up with a wider range of ballads and hope to release a full album soon.

Only time will tell if Wings will also bloom into established singers in the K-pop industry.