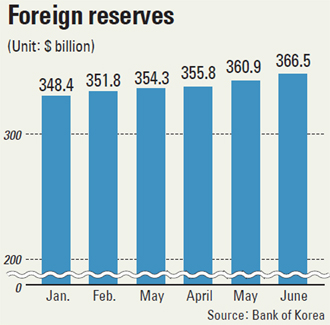 Foreign reserves stood at $366.55 billion at the end of June, the Bank of Korea said in a statement, up $5.63 billion from the previous month in the reserves’ biggest monthly gain since October 2013.

The central bank attributed the gain mainly to the government’s decision in early June to sell $2 billion worth of dollar and euro bonds as it aimed to set a fresh benchmark for other domestic debt issuers.

It also said the reserves rose on management gains and after currencies such as the euro gained in value against the dollar. The Bank of Korea does not provide breakdowns of its reserves.

June’s gain comes after market participants suspected dollar-buying intervention by foreign exchange authorities to water down the Korean won’s rise against the greenback, which frequently raises concerns it could undermine local exporters’ profits.

A Bank of Korea official refused to confirm whether the reserves had risen from direct market intervention.

The won strengthened 0.8 percent against the dollar in June, and is up 4.6 percent so far this year.

Korea has the world’s seventh-largest reserves, 91.7 percent of which are in the form of securities.