Curse of victory, blessing of defeat

Curse of victory, blessing of defeat 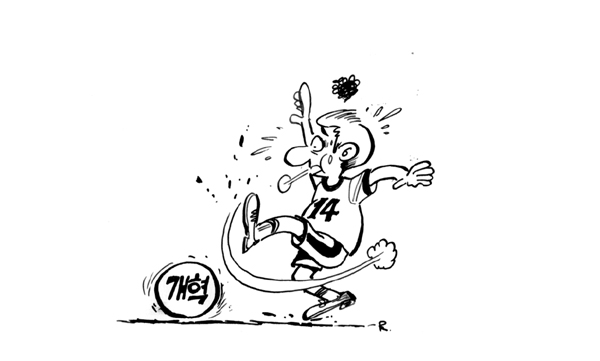 In the 2014 Brazil World Cup, many European teams that were considered likely champions were eliminated in the group stage. Spain, England, Portugal and Italy all failed to proceed to Round 16.

It may not be an appropriate analysis, but they are all former imperialist countries. Spain ruled most of South America and the Philippines, and the British Empire at one point dominated a quarter of all the land on Earth. World Cup host Brazil was a colony of Portugal, and Italy colonized North Africa, including Libya. Another commonality is that these countries are economically struggling in the 21st century, and an escalated sense of crisis has resulted in a rightist swing among their citizens. While France advanced to the semifinal, it is no exception. The fall of the imperialists of the past is evident in their football as well.

Victory is not always a blessing, and defeat is not necessarily a curse. The winner - especially the one who frequently wins - may become arrogant and forget to self-reflect. But the defeated analyze what went wrong, pledge not to repeat those mistakes and reinvent themselves.

Spain and Italy are faced with economic crises. In France and England, ultra-conservative parties are on the rise. The economic and social instability is escalating to a dangerous level. Whether it is to the left or the right, the extreme is always a ditch. If a country moves toward an extreme, citizens panic. The far-right parties exploit this psychology and have spread hatred and populism in Europe, especially the former colonial empires. Instead of reforming and rebuilding themselves, they blame external factors. They want to turn the clock back with anti-European Union, anti-globalization, anti-foreigner and anti-Islam movements.

By contrast, Germany and the Netherlands have improved themselves through self-renovation. The Netherlands has treated the “Dutch disease” by reaching a grand compromise among labor unions, management and the government. In 2003, German Chancellor Gerhard Schroder of the Social-Democrats/Greens coalition implemented a series of reforms on welfare and the tax system known as Agenda 2010, despite nationwide opposition.

While Schroder lost the 2005 election, his successor, Chancellor Angela Merkel, of the Christian Democrats, inherited the policy and pursued further reforms. As a result, Germany is enjoying the fruits of reform and, along with the Netherlands, continues to thrive while the European economy declines. After all, losses in World War I and World War II were a valuable lesson for Germany.

* The author is a chair professor at Duksung Women’s University.