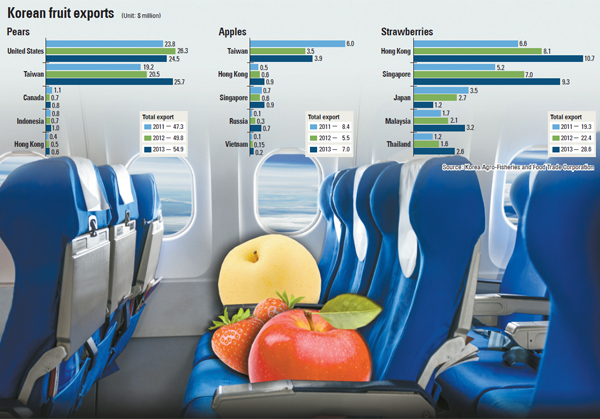 For their unique taste and texture, Korean pears are gaining popularity in a wide range of markets from Asia to the Americas and their exports have increased along with apples and strawberries.

According to the Ministry of Agriculture, Food and Rural Affairs, total exports of Korean pears reached a record high of $54.9 million, up 16 percent from 2011.

And that number will soon grow, after the Mexican government decided this week to import the pears after nine years of negotiations to enter the market.

“The export negotiation was settled after the two countries reached an agreement on conditions for inspection,” an Agriculture Ministry official said on Wednesday. The ministry expects that the first shipment of pears will be sent to Mexico in September.

The Mexican government’s decision is expected to boost fruit exports to other countries in the Central and South American markets.

The country is only the third in Central or South America to import Korean pears, following Chile and Peru, which began importing the fruit in 1999 and 2013, respectively. But the amount imported in those two countries has been too small to record.

In addition, the Korean government thinks that the trade deal with Mexico will be different because of Mexico’s proximity to the United States, which is one of the top consumers of Korean pears. The United States imported pears worth about $24.5 million last year.

“Our employees in Mexico have been telling us for a few years that they have seen Korean pears on fruit shelves,” said Baek Dong-hyun, deputy director of the Agriculture Ministry’s export assistance department. “We assume that some of our pears exported to the United States have slipped into Mexico, which means the country certainly has a demand for Korean pears.”

Foreign buyers like their pears to be about the size of an adult’s fist because they eat the fruit by biting pieces off of it, unlike Koreans, who peel off the skin and chop the flesh into bite-size pieces. The ministry says that in other countries, buyers like the crunchy texture of Korean pears compared to Western pears because Western pears easily lose their crunchiness when they become too ripe.

Along with pears, Korean apples and strawberries are also rapidly expanding into overseas markets.

Korea recorded total fruit exports worth $233.4 million in 2013, up 51 percent compared to 2008. Last year, apples and pears stayed competitive with prices in overseas markets thanks to expanded production at home of about 61 percent over the previous year.

The United States, the second-largest importer, likes Korean pears for their unique shape, which stands out from American gourd-shaped pears. However, the Korea-U.S. free trade agreement eliminated fruit tariffs in 2012, opening up opportunities for an increase in exports.

Apple exports, down to $5.5 million in 2012, rebounded to $7 million last year. Taiwan, which mass consumes the fruit, was the No. 1 buyer of Korean apples last year as its local production declined.

But worldwide, Japanese Fuji apples dominate the market largely because people are not aware of the quality of Korean apples. While Japan’s Fuji apples were selling for 3,300 won ($3.27) per unit in Taiwan earlier this year, the same strain produced in Korea was selling for 1,100 won.

“Because Korean apples can’t beat those from the United States, Chile and New Zealand in price, we should build our own high-quality brand image like Japan did,” said an Agriculture Ministry official. “It is true that the quality of our apples is still behind in consistency and packaging.”

Korean strawberries are selling well in Southeast Asia because they have firmer flesh when compared with Japanese strawberries.

Strawberry exports amounted to $28.6 million last year, up from $19.3 million in 2011. Hong Kong was the largest consumer, purchasing $10.7 million worth of the berries, or 37.4 percent of total strawberry exports.

Agriculture Minister Lee Dong-pil last month chose strawberries as one of the next-generation export items in which the government will invest 19 billion won over the next decade to develop a new strain that can stay fresh for longer. The goal is to reach $100 million in strawberry exports by 2022.

Because Korea has signed trade deals to allow for increased exports, the domestic agricultural market will be more exposed to an inflow of foreign-produced fruits.

One example is cherries from the United States, which became hugely popular in Korea after the Korea-U.S. FTA eliminated tariffs in 2012.

Korea imported 9,325 tons of American cherries in 2012, almost twice as much as the 4,737 tons brought in the previous year. Last year, Korea bought 17.4 percent of the United States’ total cherry exports.

Experts are worried that the increase in cherry imports may result in reduced consumption of locally grown fruit this summer.

The Nonghyup Economic Research Institute said that the proportion of imported to exported fruit is increasing by up to 3 percent each year in total fruit sales at local large discount chains where most Koreans shop.

A study by the Rural Development Administration estimated that about 28 percent of local consumers purchase less local fruit to buy American cherries instead.

“There should be a set of sales strategies to encourage people to buy locally grown seasonal fruits,” said Jung Jun-ho, a researcher at the Nonghyup institute. “Also, the Korean government should enhance the quality of Korean cherries to attract local cherry lovers to buy locally produced cherries.”