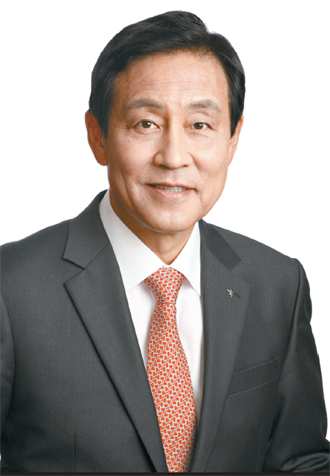 “This is a sensitive issue that has to be dealt with delicately,” said Kim in a meeting with reporters in downtown Seoul. However, he stressed that doesn’t mean the financial group is pushing for a merger.

“It is a decision I can’t make on my own and needs to be discussed with both presidents of Hana Bank and KEB as well as our board of directors,” Kim said. “When looking at the merger [of Hana and KEB] in Indonesia [which happened in March], personally [it made me think], ‘Isn’t now the time to start discussing the merger?’”

The biggest interest in the financial industry recently has been the possibility of an early merger between the two banks especially as KEB has been struggling recently more severely than other banks.

When Hana Financial Group acquired KEB in 2012, KEB was guaranteed it would operate under independent management for five years. The merger discussion was to take place only after 2017.

There has been speculation in the banking industry since early this year that Hana might have to merge the banks before then in the hope of becoming the nation’s leading bank.

Hana Bank last year reported a net profit of 655 billion won ($649 million), a 46 percent drop compared to the 1.1 trillion won net profit it reported in 2011 prior to the acquisition.

KEB has seen a sharper decline in its profit, which tumbled 78 percent from 1.6 trillion won at the end of 2011 to 360 billion won last year.

The average net profit decrease for commercial banks over that period was 58 percent.

The chairman stressed the successful merger of operations in Indonesia between the two banks during a recent visit to Jakarta.

Hana Bank and KEB, which had operated separately in Jakarta, officially merged in the largest Southeast Asian market under the name PT Bank KEB Hana.

According to Hana, compared to February before the two banks in Indonesia merged assets there, its assets as of the end of June increased nearly 13 percent, net profit rose 42.2 percent and loans were up 19.9 percent.

“I went to Jakarta for many reasons, including handing out bonuses to our employees, but mainly because I was curious as to how the merger has been doing,” Kim said, adding that he was accompanied by seven people from KEB and Hana.

“[The employees] told me that before the merger work was difficult, but now everything is sailing smoothly,” Kim said. “Even our clients that I met, including the Korean ambassador to Indonesia, the head of the Korean community and businessmen said merging the two banks was much better.

“The performance there is growing at an alarming speed,” Kim said. “It shows that in finance, mergers are the answer.”

Hana Bank and KEB operations in China are expected to be merged in October.