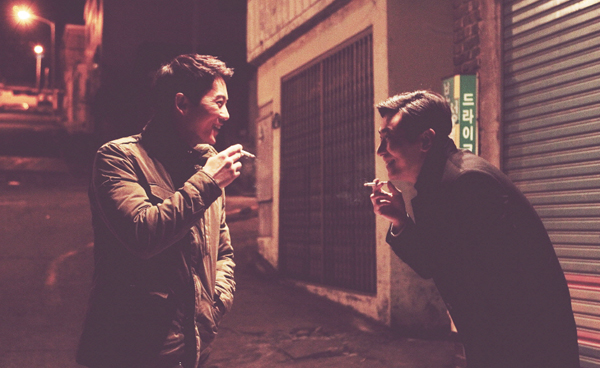 Actors Ji Sung, Joo Ji-hoon and Lee Kwang-soo are talented actors in their field of expertise, from rom-com films to melodramas and even on reality shows.

But seeing the three of them side by side as best friends in a murky crime film? The unlikely combination raised question marks but also triggered curiosity about what kind of “guy” story the three male actors are going to tell.

Surprisingly, “Confession” doesn’t conform to the usual template of Korea’s crime or noir films that depict palm-sweating chases and fights accompanied by a large amount of blood. Instead, it examines the essence of human relationships by showing how the once inseparable trio end up separated and alone when the good intentions of one friend results in horrible scenarios for the other two.

“I tried to show as much reality as possible,” said the movie’s director Lee Do-yun at a press screening held on June 25 at Wangsimni CGV in northeastern Seoul. “I wanted to make a story about human relationships that anybody, regardless of gender, could sympathize with.”

And he pulled it off in his debut feature film “Confession,” which follows the fate of three best friends ? Hyun-tae, In-chul and Min-soo - played by Ji, Joo and Lee, respectively, after Hyun-tae’s mother is killed in what seems to be a planned crime. Hyun-tae, the most introverted of the three characters, seeks help from his two best friends, without knowing that they were the ones who set fire to his mother’s game room.

Of course, In-chul and Min-soo, had set out with the intention of mending the relationship between the estranged mother and son. Hyun-tae had been at odds with his mother since he disapproved of her illegal business.

His two friends thought that if they burned down the game room, it would allow Hyun-tae to start talking to his mother again. And, they thought, a huge collection on fire insurance along the way wouldn’t hurt either.

But as Hyun-tae looks deeper into how the accident was caused, suspicion starts to permeate their friendship and a sense of betrayal, frustration and regret among the three kicks in as they begin to doubt the past 20 years they have spent together.

What was heartbreaking in the film was In-chul’s excruciating efforts to redeem himself for what he has done to Hyun-tae and their relationship, but nobody will give him credit for it. And although the viewers understand where his relentless attempts to salvage the friendship are coming from, nobody in the film is willing to give the helpless soul a comforting pat on the shoulder.

In the end, the movie raises a number of questions about the genuineness of friendship. Was I the kind of friend I think I was or were there moments when I did a good deed that turned into something bad? The questions will linger.

The movie opens in theaters on Thursday.